Share All sharing options for: Marc-Andre Fleury and Save Percentage: Part II

Last week, I took a look at how Fleury performed while the opposing team was on the power play this past season. Seeing that Fleury's power play save percentage was well above average (as well as a new career high), I'm now going to turn to Fleury's performance at even strength. The sample I'm using for this analysis was the same one I used in my last analysis. I'm hoping to find an explanation in this data that answers the question: What happened to Flower this year?

You can clearly see that Fleury's even strength save percentage was well below the mean (about 1.5 standard deviations), and only the play (or lack thereof) of Jeff Deslauriers and Brian Elliot kept him from being last. It's obvious at this point that Fleury's even strength save percentage was the culprit behind his sub-par performance this season. But one of the issues that needs to be addressed is the play of the defense in front of Fleury this year, or more succinctly, shot quality.

There are some who believe that the skaters in front of a goalie have a negligible effect on the quality of the shots he faces; others have provided convincing evidence that shot quality exists, can be measured, and is significant. One way to measure shot quality is to look at the characteristics of shots a goalie has faced (such as shot distance, shot type, and manpower situation, among others). Then you use those factors to come up with the number of expected goals against, according to league averages. You can then compare expected goals against and actual goals against to get a measure of shot quality.

But since I have some time on my hands, I decided to try a different strategy. I went back and used the videos on the Penguins' website to re-watch all of Fleury's even strength goals against this year. My goal was to find out how many "soft" goals Fleury gave up and how many "normal" goals Fleury gave up. After agonizing over the definition of a soft and normal goal, I settled on using the definition of a scoring chance. From the guys over at Copper and Blue, a scoring chance is defined as a clear play directed toward the opposing net from a dangerous scoring area - loosely defined as the top of the circle and in and inside the faceoff dots. I didn't count a wrap-around as a scoring chance. For those who are visual people, I've outlined the scoring chance area in this diagram:

I know I won't be winning any artistic awards in the future, but the point is that this is a workable definition of soft vs. normal goals. The overwhelming majority of goals in hockey games are scored from this area of the ice, as is demonstrated here and here. Considering goals scored within the chance area as normal and those scored outside of it as soft seems reasonable. Of course, there are some caveats with this analysis that I created to rectify some of the serious objections with this examination. One concerns rebounds. A rebound is defined as a shot of 25' or less that is taken within two seconds of another shot, with no intervening event (taken from Alan Ryder's 2004 paper). So, if Fleury gave up a rebound and an opposing player immediately scored a goal off of it, even if it was in the chance region, that goal will labeled as a rebound negation and counted against Fleury.
The other caveat is that if a goal was scored outside of the chance area, it would not be counted against Fleury if there was at least one mitigating circumstance. I identified four mitigating circumstances: an own team goal, an odd-man rush, a deflection or a tip-in, and a screen in front of the goalie. I defined a screen as when any skater on the ice significantly obstructs the goalie's vision and prevents him from seeing the puck.
With that out of the way, I re-watched all of the even strength goals that Fleury gave up and tallied up how many fell into each category. The results (note that "No chance" means outside the chance region): 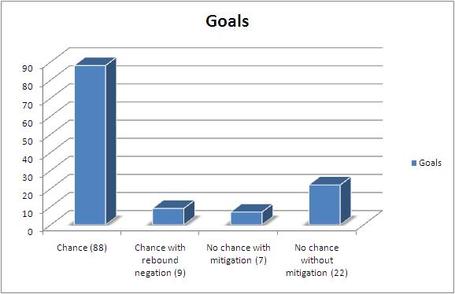 Whew! That's a lot to digest. While one could spend hours combing through all of this, I'm only going to analyze the percentage of goals in which Fleury was at fault. By my count, Fleury was not responsible for 95 goals (chance + no chance with mitigation) and responsible for 31goals (no chance without mitigation + rebound negation). So Fleury was not responsible for 75.4% of scores and was at fault for 24.6% of goals. Also of note is that  77% of even strength goals scored were in the chance area and 23% were outside the chance area.

After playing around with this data for a bit, I realized that this would be much easier if I had a reference point to compare Fleury's numbers to. I wanted to repeat the process for a different goalie who played close to the same number of games as Fleury. I settled on Ilya Bryzgalov, who started 69 games and finished this season with a .920 total save percentage, a .928 even strength save percentage, and a Vezina trophy nomination. After repeating the above process for Bryzgalov, I came to these figures:

Without repeating too much, it doesn't look like Fleury had an awful year. If fact, it doesn't even look like he had a below average year. His power play save percentage was a new career high, and it was well above average among starting goalies this year. While his even strength save percentage was very low, it seems to be more of a product of the defense in front of him. Fleury was no less focused at even strength than Vezina nominee Ilya Bryzgalov, and had the team in front of him played even average defense, his save percentage would be right where it was last year.

I think it's important to remember that Fleury's path to success hasn't been without obstacles that would have hampered a lot of other people. As an impressionable 19 year old goalie, Fleury played 21 games behind an absolutely terrible Penguins team. Instead of letting that experience destroy his confidence and stall his development, he battled on. Though many doubted him, he eventually was able to hoist Lord Stanley's fabled trophy above his head on June 12, 2009. And for those who say he was a below average goalie riding shotgun on a talented team, here's Fleury's stat line in the four Stanley Cup Final wins last year: 118 SA, .949 SV%, 1.50 GAA. Possibly the scariest part is that Fleury hasn't reached his peak yet. When that time comes, I really hope that Marc-Andre Fleury is still wearing a Penguins uniform.