Share All sharing options for: Shooting Percentage And Pascal Dupuis

I've looked at how the players from this year stacked up when it came to adjusted^ +/-, penalties, Corsi, and giveaways and takeaways. Now I'm going to look at shooting percentage. And I promise that Pascal Dupuis does have something to do with this post.

I'll be looking at 5-on-5 (even strength) data for this post, and all data was pulled from behind the net. Here are the numbers from this year: 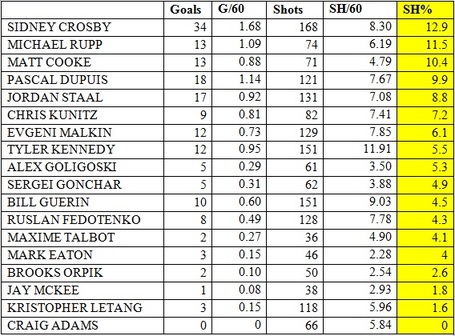 First, Goligoski's case for most underrated player this year has re-gained momentum. He led all defensemen in shooting percentage, and was second in that group in goals/60. Considering that Goligoski had below average teammates this year, he probably would have eclipsed Gonchar in these totals had he been on the ice with better players. Yes Gonchar was great on the power play, but we're paying Gogo only 33% of Gonchar's salary for identical even strength production. Also, props to Letang for leading d-men in shots/60. His S% will go up next year, so expect an increase in both goals and points for him.

As to the forward group, Guerin and Fedetenko continue to trend near the bottom, and it's not a surprise that both of these guys are still without a team for next year. The third line did really well this year in all categories, and it's pretty obvious that Tyler Kennedy really likes to shoot the puck (imagine the damage he could cause if he added another dimension to his shot). Staal's numbers are also really impressive given his circumstances, and I think he could tear it up if he got to regularly play with Evgeni Malkin. Lastly, Crosby is awesome, and Rupp was a big bargain this year.

What about Dupuis? He was second on the team in both total goals and goals/60, ahead of players like Malkin and Staal. He's only 6th in shots/60, but his shooting percentage is third on the team, meaning that he's probably got more shooting talent than he is typically given credit for. When you look at all of this together, Dupuis looks like a top-six forward on our team. I think that the Penguins should consider moving him to that position permanently, especially because he has such a reasonable cap hit. Sure we'd like Zach Parise or Alexander Semin instead, but that simply isn't feasible when Crosby and Malkin are on the same team.

And to provide some further context for Dupuis' credentials, his 1.14 ES goals/60 was 31st among all forwards who played 40 games and saw 10 minutes of ES ice time, ahead of guys like Rick Nash and Henrik Sedin. And his ES S% was tied for 44th in that same group, eclipsing players such as Nicklas Backstrom and Daniel Sedin. Pascal Dupuis might not be winning the Hart trophy anytime soon, but he's proven this year that he can be a full-time top-six forward for the Pens.