The Penguins And Zone Starts

Share All sharing options for: The Penguins And Zone Starts

I previously looked at how the players from this year stacked up when it came to shooting percentage, penalties, Corsi, giveaways and takeaways, and adjusted^ +/-. Today, I'm going to look at zone starts, and who on the Penguins was being advantaged or disadvantaged by the zone in which Bylsma deployed them most often.

Thanks to Behind the Net for supplying all of the data.

The context factor of zone starts is pretty obvious. If Player A hops over the board for a ton of offensive zone draws, while Player B is stuck taking a lot of defensive zone draws, it doesn't make sense to look at those two players in the same light. Player A's offensive and defensive numbers will be boosted, since he gets to start in the zone closest to the opposing goalie. Over the course of the season, he will have had a much easier time scoring points and improving his Corsi than Player B. Since we know that a lost d-zone draw costs the losing team about 0.25 shots on goal, this can have major effects for regular players over an 82 game season.

Here are the numbers for the Penguins last year (and for those who aren't aware, RATING is adjusted +/-): 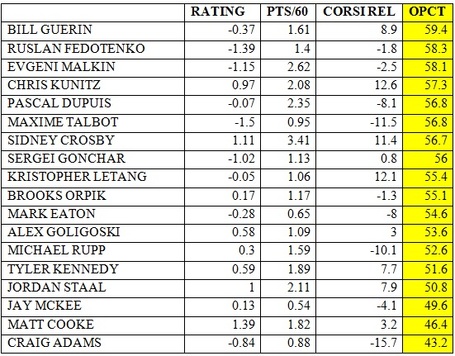 The first thing that stands out to me is the trio of awesomeness that is Kennedy, Cooke, and Staal. They were the line that had the lowest OPCT this year, so it would be excusable if they had poor adjusted +/-'s and were in the negative when it came to relative Corsi. Yet that didn't happen. They all had positive relative Corsi's, high pts/60, and very good RATING's. The third line got a lot of praise this year for what they were able to accomplish, but it looks like they deserve a little bit more considering that they weren't the benefactors of most favorable circumstances.

Goligoski also stands out to me, as his case for the most underrated Penguin this year gets another boost. He didn't have the zone start benefit that Orpik, Letang, Gonchar, and Eaton had, yet he put up a better adjusted +/- than any of those guys, a better relative Corsi than three out of those four, and produced at a really high offensive rate. McKee also gets props for coming out positive in adjusted +/- while having such a low OPCT.

The biggest disappointment for me in that group was Gonchar. For a guy that had the highest OPCT among our defensemen, he wasn't dominating in Corsi and adjusted +/- like he should have. He's going to be tough to replace on the power play, but he really was nothing special while at even strength.

As to the other bad news, Guerin, Feds, and Malkin don't look very good. Malkin and Fedetenko were getting a huge advantage in terms of where they started their 5-on-5 play, but when you come out in the negative in both relative Corsi and adjusted +/-, then you're simply not playing good hockey. Guerin looks good in relative Corsi (though I suspect that has more to do with Corsby and Kunitz), but his adjusted +/- is low, and there's no reason a guy who is seeing a 60% OPCT should be anywhere near -0.37.

What do you guys think?