Share All sharing options for: Goals, Assists, And Equality

It's no secret that there are more assists awarded in the NHL than there are goals scored. This is all well and good, but it raises the question: should we view them as equal? The current system the NHL employs thinks so, as it awards a player one point for a goal and one point for an assist. Yet the data from 2005-2008 suggests otherwise.

Hop on the train everyone, Statville is our next stop...

First, let's look at the goals and assist data from 2005-2008. The data were gathered from this page at behind the net. "Ratio" is simply the number of assists divided by the number of goals. The chart:

Looking at this four year sample (there's no data for this year), it's obvious that goals are more valuable. Why? Because they are more scarce, and the more scarce something is, the more valuable it becomes. It therefore seems silly to treat goals and assists as equal accomplishments. We might be able to get a better estimation of a player if we adjust for this difference.

Here are the top 20 scorers in the league this year: 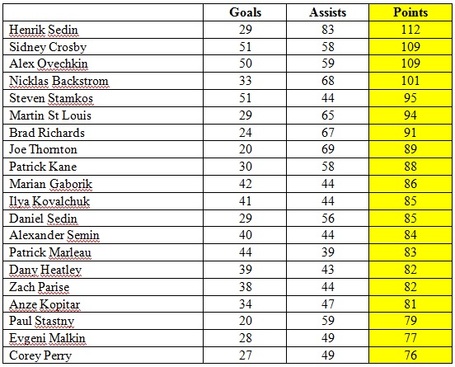 Now we'll make an adjustment. The average ratio over the four year sample was 1.73. I'm going to multiply a player's goal totals by 1.73 (which gives me Goals^) and add his assists to that number. That will give us an adjusted points number (Points^) and tell us who is providing his team with the most value, strictly in terms of goals and assists. The numbers: 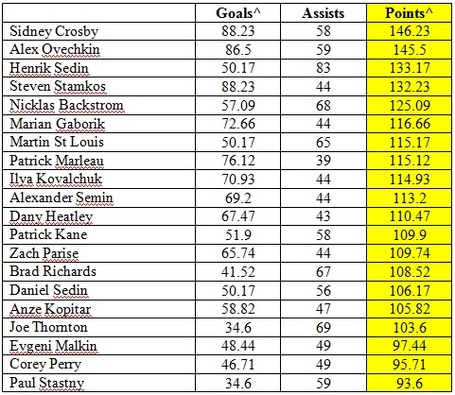 At the very top we see that Crosby and Ovechkin really separated themselves from the rest of the pack this year. It would have made sense for the Hart trophy to have been a tight race between these two, but we all know that wasn't the case. I interpreted this data not as a knock on Sedin but as a boost to Crosby and Ovechkin. Henrik accomplished some great things this year, but that shouldn't have prevented Crosby or Ovechkin from getting the recognition they deserved.

As to the rest of the players, Marian Gaborik, Patrick Marleau, and Alexander Semin all see a big boost in their points^, which makes sense since these guys were some of the most prolific goal scorers this year, and provided their teams with more value than they got credit for. As to those that dropped, Patrick Kane, Brad Richards, and Jumbo Joe took the biggest dives.

Overall, I think the NHL should look into altering their system of how they assign credit for goals and assists. I doubt this will happen though since the league has been doing it this way forever, and wouldn't be happy with all the chaos created by applying this system retroactively. While it isn't the biggest problem or most pressing issue in hockey today, it still is something worth considering, especially since so many people only look at point totals to evaluate the quality of a player. It's not perfect, but it would be a big step in the right direction.