Adjusting For Teammates And Competition

Share All sharing options for: Adjusting For Teammates And Competition

One of the basic rules of interpreting hockey statistics is that all stats have to be placed in context. Adjusted +/- (also labeled as RATING at Behind the Net) is no exception. Two of the most important contextual adjustments we can make is controlling for the quality of a player's teammates and competition. While those stats are individually available, there's no method that incorporates them directly into a player's adjusted +/-...until now!

A player's adjusted +/- is the difference between his +/-ON/60 and +/-OFF/60. The reason for this is that raw +/- numbers tend to favor good players on good teams. A player might be very good, but the fact that he plays on a terrible team depresses his +/-. Player A might be a -1.5/60, but if the rest of his team is a -3.5/60, then player A has an adjusted +/- of +2. In effect, the adjusted +/- stat compares a player to his teammates, which helps to correct for some of the traditional bias that +/- has had toward good players on bad teams (for more on this topic, see this article).

While this is a step in the right direction, we're not done yet. The quality of a player's competition and teammates will have a real effect on what his adjusted +/- will ultimately be. To account for this, I've come up with a simple formula that I think captures these two effects:

One statistic to keep in mind when looking at adjusted +/- is PDO. Since PDO is the summation of a player's on-ice ES SV% and on-ice ES S%, it measures whether a player put up a high adjusted +/- simply because he was lucky (note that S% is not the individual player's, but rather the collective S% while he's on the ice). PDO regresses very heavily to a mean of 100%, and only a handful of NHL players can consistently maintain an elevated level. Players who have a high adjusted +/- and a high PDO will very likely see a decrease in their adjusted +/- in the near future.

Now for some numbers. I used this formula to look at most of the Penguins from this year, and here's what I got: 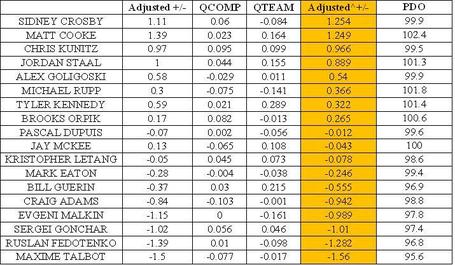 Overall, there aren't any drastic changes between adjusted +/- and adjusted^ +/-. Sidney Crosby led the team because he's the best player in the world, and even more encouraging is the fact that his PDO is very likely to go up in the future. Surprisingly, Kunitz and Goligoski were both near the top in terms of adjusted^ +/- while also having mediocre PDO's. After learning that these two were some of the best Corsi players on the Penguins last year, this is further proof that they both had very underrated seasons. The third line also put up very good numbers, but all of their PDO's were inflated, so their adjusted^ +/- is likely to come back down in the future.

As to those on the bottom, a lot of them were victims of bad luck. Everyone from Kris Letang down will have a higher PDO next year (especially Talbot and Fedetenko), so I wouldn't worry that this is a long-term problem. The one surprise for me is Bill Guerin. Considering that he was so high in Corsi, and that Crosby and Kunitz did really well in the adjusted^ +/- department, I expected him to come out better. It looks like the numbers say that away from Crosby and Kunitz, Guerin was not a very good player.

What do you guys think of this formula?