In an ideal world the Penguins would never take any penalties, and we would play the entire game on the man advantage. But since it can't be too obvious that we're Gary Bettman's team, we have to deal with even strength play, and even a penalty kill sprinkled here and there. And since drawing and taking penalties can have real and significant effects on a game, it would be nice to know which Penguins excelled in this category.

As always, a big thanks to Behind the Net for supplying all of the data.

The first thing I'm going to do is to look at penalties taken and drawn while at even strength. Looking at raw taken and drawn stats doesn't tell the whole picture, as a player who draws a lot of penalties might also take a lot of penalties, effectively eliminating any positive effect. Looking at PIM/60 is also misleading, and Mike Rupp provides a clear example why. For every fight he gets into, Rupp takes a five minute major. If we just looked at PIM/60, he'd look pretty bad. What this ignores, though, is that he simultaneously drew a five minute major from an opposing player, effectively making this whole thing a wash. I think that the best way to judge penalty discipline and effectiveness is to look at the difference in penalties taken per 60 (PTAKE/60) and penalties drawn per 60 (PDRAW/60), which gives you a penalty +/-. Here are the ES numbers for this year: 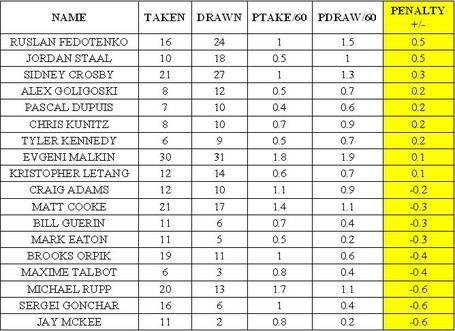 Not surprisingly, Selke candidate and Katielynn's future husband, Jordan Staal, is tied for 1st on the team in penalty +/-. What is surprising is who he's tied with: Fedetenko. Even though he had a terrible season by most measurements, this is one facet of the game in which he actually earned his salary. It's also nice to see Crosby and Malkin on the right side of the stat, but for players with their level of talent, they need to start creating a bigger difference in their penalty +/-.

The bottom players basically comprise the defensemen and the 4th line. The defensemen are there because their position induces them to take more penalties than average, and the 4th liners are there because they don't have the offensive talent to draw enough penalties to make up for the ones they take. Also of note is that Goligoski, a d-man, was tied for third on the team in penalty +/-. He continues to make a strong case for the most underrated Penguin this year.

While the time the Penguins spend on the pp and the pk is small compared to ES, I figured I'd take at look at those stats from this year. First, penalty stats when the Penguins are on the power play: 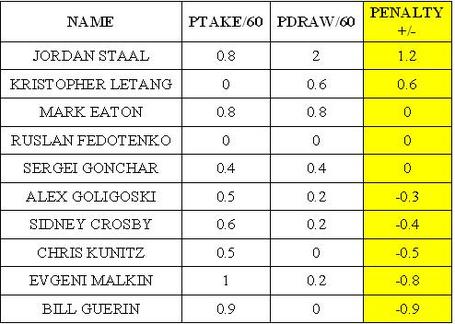 [Raw drawn and taken totals are not reported for special teams play at Behind the Net.]

We can see that Staal continues to be the man. Even in the limited pp time he sees, he still manages to draw penalties and give the Penguins valuable 5-on-3 ice time. Letang also stands out as performing exceptionally well in these circumstances, and Bill Guerin continues to rank near the bottom in penalty +/-.

Now let's look at the numbers while the Penguins are on the pk: 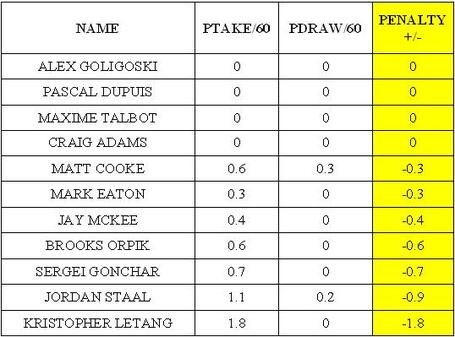 It's nice to see that some of the Penguins' regular penalty killers such as Adams, Dupuis, and Talbot weren't a negative in penalty +/-. But if Kris Letang is going to be a top 4 d-man next year, he's going to have to kill penalties at a regular rate, and he can't be a -1.8 in penalty +/-.