Getting To Know Zbynek Michalek

Share All sharing options for: Getting To Know Zbynek Michalek

The Penguins' biggest free agent pick-ups this off-season were Zbynek Michalek and Paul Martin. Since the free agency buzz has settled down over the last couple of days, I figured that now would a good time to look at what these guys bring to the table. I'm not going to personally analyze Paul Martin because John Fischer already put together an awesome analysis.

As always, props to Behind the Net for supplying all of the data.

I'm going to compare Michalek to defensemen who saw a similar level of competition. There were 174 defensemen this year who played at least 50 games and saw 10 minutes of ES ice time. Michalek ranks 14th when that group is sorted by QCOMP. For this analysis, I'll be looking at the top 20 defensemen in terms of QCOMP. A description of what OPCT is can be found here. Let's see how Michalek stacks up (click the image to enlarge it): 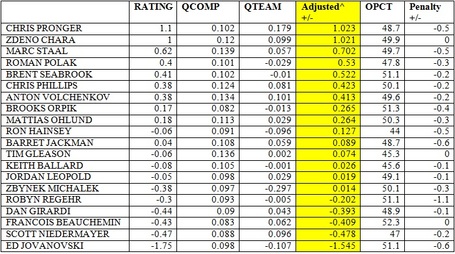 The first thing I notice is that outside of Chris Pronger and Zdeno Chara (who happen to have some the highest QTEAM ratings), none of these defensemen have killer adjusted^ +/-'s. Michalek is 14th in QCOMP and last in QTEAM (or first, depending on your perspective), and his adjusted^ +/- rating puts him at 15th. His zone start isn't much of a factor because it's not too far in either direction, and his penalty +/- is average among this group of players. He doesn't stand out, but remember, we're looking at the best of the best.

What I'm going to do next is repeat the analysis using Corsi QoC and Corsi QoT. Corsi QoC measures comeptition just like QCOMP, but instead of using the adjusted +/- as a base, it uses the Corsi ON statistic. What this is measuring is how well your competition out-attempted opponents. High Corsi QoC's mean that your competition was out-attempting opponents and controlling possession, making them very formidable players. Corsi QoT uses the same logic, but applies it to your teammates. If you're Corsi QoT is low, then you're on the ice with a bunch of guys who get out-attempted, which makes your job more difficult. The numbers: 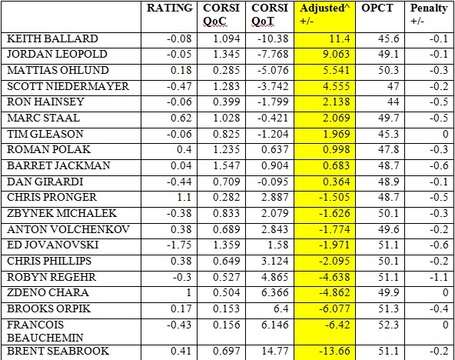 Michalek jumps to 12th using the Corsi ranking, and Brent Seabrook takes the biggest dive as he falls to last in this group. The reason for this is that his Corsi QoT was huge compared to the other guys, so a lot of his adjusted +/- is more a result of his line mates.

The last even strength category I'm going to look at is goal and shot differentials while these players are on the ice. Here are what the stats show: 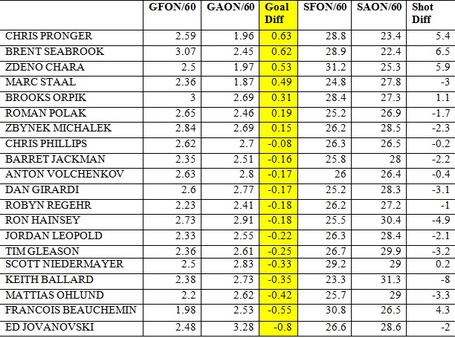 Using goal differential as a variable, Michalek ranks 7th out of 20. This is quite a feat considering that the 13 players below him, all of whom had better teammates, were a negative in goal differential. Michalek's -2.3 shot differential was 14th in the group, but it's not too far off from the others, as Robyn Regehr's -1.0 was ranked 9th. And one stat that isn't represented on these graphs, shot-blocking, also speaks favorably of Michalek's talents. Among the 199 defensemen who played 40 games this year, Michalek's 5.4 blocks/60 ranks 38th. Overall, Michalek is a very solid even strength player, and comparing him among some of the best defensemen in the league does not diminish his achievements.

Now let's look at Michalek's short-handed stats. I'll use the same group of 20 that I used above. Some numbers: 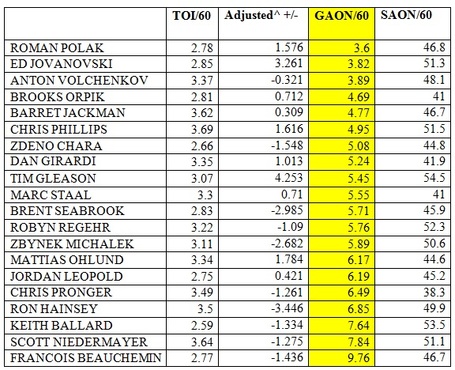 Michalek is 11th in SH TOI/60, so we know that he's a strong penalty killer because he's getting a lot of minutes. His adjusted^ +/- is 18th in the group, but he ranks 13th in GAON/60. He's also below average in terms of SAON/60, but he's not too far from the middle. He's not getting torched while on the ice, and though he's below average when measured against this group, his TOI/60 and shot blocking numbers are indicative of a solid penalty killer.

Regarding his performance on the power play, I'm not going to take an in-depth look at Michalek's numbers because he didn't see a ton of man-advantage time. His 1:30 ppTOI/game was last on the Coyotes this year, but his 3.4 power play pts/60 was average. This could mean that he's got the ability to be a solid d-man on a second power play unit, but we'll probably know more once we see how the coaching staff decides to use him next year.

Finally, I figured it would be nice to compare what these 20 players will be making in 2010-2011, since some bloggers think that Ray Shero overpaid for Zbynek Michalek. It doesn't look that way: 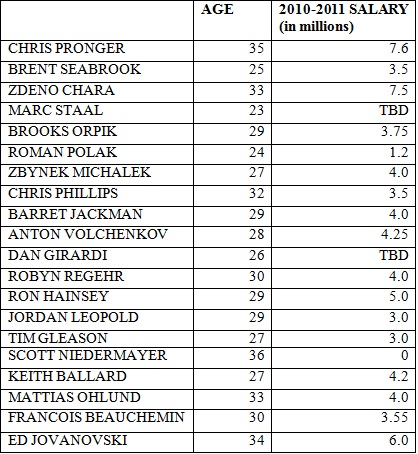 The average 2010-2011 salary for players who have salaries set at this time is $4.24M. Considering that that number is depressed because younger guys like Seabrook and Polak haven't had a chance to negotiate a new contract, Michalek is getting the money he deserves. He's done a great job against really tough competition while also having crappy line mates. He kills a ton of penalties, blocks shots very well, and is only 27 years old. Since Shero got him to sign a five year contract, there's a distinct possibility that Michalek could outplay his contract in a couple of years. The Penguins blue line is going to be much better next year simply because Zbynek Michalek is wearing black and gold.