No Hearing for John Carlson's High Hit on Matt Cooke

Share All sharing options for: No Hearing for John Carlson's High Hit on Matt Cooke

By now, we've all seen and discussed John Carlson's high hit on Matt Cooke in the final seconds of the Pittsburgh Penguins and Washington Capitals showdown. What many felt was a hit worthy of a hearing and even a Shanaban ends up being, well, worthy of neither.

Shelly Anderson from the Pittsburgh Post-Gazette provided us with this email from League spokesman John Dellapina:

"Brendan (Shanahan, who handles supplemental discipline for the NHL) reviewed the entire play from the moment the puck enters the Washington zone.

"The Department of Player Safety's view is that, with barely enough time for one last rush, Carlson was desperate to join that rush. He doesn't even see Cooke coming toward him until the last minute (his view of Cooke is obscured by Ovechkin until the last moment) and he actually cringes to avoid contact if you can pause it when they're a couple of feet apart.

"The worst-looking part of the play is when Carlson flares out his right arm. But he does that as he's past Cooke, in a "get out of my way, I have to get up ice" kind of way."

For a League that has been impressing the importance of player responsibility (see James Neal's fine for his stick hitting P.K. Subban in the helmet after Subban slew footed him), this seems like a fishy call. You have to wonder if the same explanation was used when Dave Steckel hit Sidney Crosby during the Winter Classic. Officials pointed out that Steckel was only trying to join the rush.

Dave Molinari followed up by talking to Dan Bylsma who noted that Cooke wasn't hurt and he doesn't feel Cooke's reputation played a part in the decision.

My take: Am I surprised? No. Disappointed? Absolutely. The NHL hasn't been consistent in punishments yet and many of their explanations have been lacking. The "get out of my way, I have to get up ice" excuse is just that, an excuse. Could players potentially through a high hit and fall back on that reason? Or what about hitting players high in traffic?

I've been a fan of Carlson since his game-winning goal in the 2010 World Junior Tournament. He's grown tremendously in the Capitals organization and does a great job against teams' top lines, but this was an unnecessary hit in the final three seconds of the game. The puck was also in the Caps' defensive zone. I could see if there were 10 seconds, but 3? Not so much.

Also, does this screen cap show that Carlson didn't see Cooke till the last second? 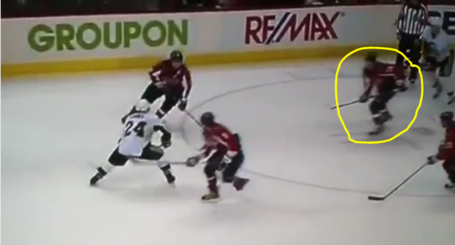 I don't think so; I'm just not buying it.

The important thing is Cooke isn't hurt, though I know plenty of opposing fans would have relished the irony in an injury. Life goes on and so will we.

What are your thoughts on the hit/non-hearing decision?