Share All sharing options for: Jockeying for playoff positioning

Christmas, all-star, a random week in February (Feb 18-19) and this weekend.

That's the only times all season that the Penguins don't play on either a Friday or a Saturday of the week.

So there isn't much going on.  The team was off completely on Wednesday, practiced briefly yesterday (and then did military style team building) and had their Skates & Plates charity dinner last night.  Today they're off all day and will practice tomorrow before Sunday's NBC matinee when the New York Rangers come to town.

It's a good time to keep an eye on the standings in the ever-changing race towards the playoffs: 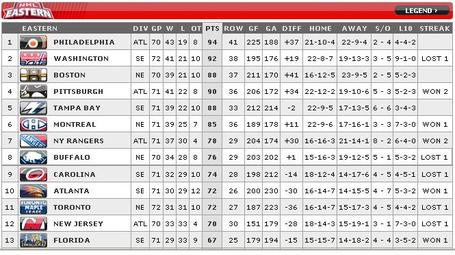 -Philadelphia lost in a shootout last night, but with 4 points (and a game in hand) it's going to be difficult for the Pens to catch them with only eleven games to go in the season.  Which probably means the Pens are looking at the 4/5 battle.

-But, if you're a glass-half full guy or gal, take hope in that 7 of the last 11 Penguins opponents find themselves out of the playoffs right now.  And there are still 2 games remaining with the Flyers.  The Flyers, conversely, have 7 of their last 12 games versus teams that would make the playoffs if they started today.  So, on paper, Pittsburgh has a more favorable down the stretch schedule.

More for you, after the jump...

-Tampa has been slumping in the last 10, but the key could be the new ROW column.  It stands for regulation + overtime wins (i.e. no shootouts) and is the first tie-breaker.  So if Montreal manages to end up tied with Tampa (or if Tampa surges and catches the Pens) Tampa likely will lose the tie-breaker and be a lower seed based on their low ROW number.

-Big blow for Toronto and New Jersey, who both lost in regulation last night.  Both those teams have been on fire of late, especially Jersey, but last night's losses almost take all the hope of making the playoffs away.  They just have too many teams to catch and pass and are going to just run out of games before they could do it.

-The Rangers famously got their hearts broken in game 82 last year, when Philadelphia beat them in a shootout and clinched the final playoff spot.  This year, ironically, the Rangers are a very solid 8-2 in shootouts, and those extra points gained have them above the fray for the 8/9 battle....For now, anyways.

-Also weird to see the two New York teams of note being dreadful at home, but still in the playoffs due to a solid road record.  Might that mean they'd be a tough out for a higher seed?  Tough to figure them out, but with Henrik Lundqvist and Ryan Miller manning the cages, you'd have to imagine a 6/7/8 seed upsetting a division winner is again a distinct possibility in the East given the caliber of goalies that will be low seeds (throw Cam Ward in the mix too, if Carolina makes it).

What's the thoughts for the Pens post-season position?  To me, it looks like a 4/5 matchup, likely with Tampa or Montreal.  Given styles and experiences with both teams, my initial reaction would be to rather play the Lightning rather than the Habs.  Of course though, a few weeks ago it looked like Pittsburgh and Washington were on a first round collision course, but then the Caps went on a nine game winning streak.  Which stands as a good reminder that the standings can and likely will look different in a few weeks than they do today.