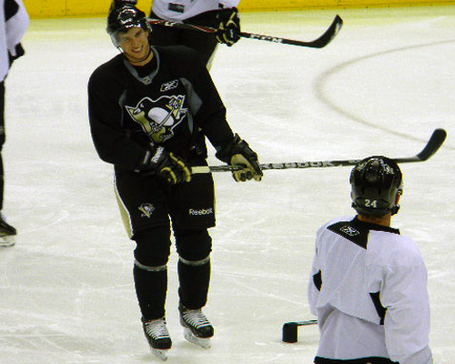 Photo from penguins.nhl.com  Great to see cappy smile again...Take special notice of the guy's helmet that he's looking at, too
Pens vs. Flyers today, and it's one of the biggest games of the season.  In this final matchup of the regular season, the Flyers could put a lot of distance on the Pens with a regulation win.  However, if Pittsburgh can send Philly away with 0 points, it's going to be a dead heat down the stretch for the Atlantic division title (and likely the #1 or #2 seed in the Eastern conference).
So, yeah, it's a big game.  News and notes to be updated..
--Brad Thieseen has been sent back to WB/S.  Brent Johnson skated (sans pads) this morning and obviously is good enough to sit on the bench in an emergency capability tonight.  Hopefully he doesn't have to be pressed into action anytime soon.
--Sidney Crosby again skated this morning before the team with injured players (and Matt Cooke).  Word on the street is he may, very soon, be taking another step in his progression, which will be joining the team in a full practice.  But for now, it's all smiles as Sid continues to work out and work his way back from the dreaded concussion.
--Mark Letestu is back with the "first" line with wingers James Neal and Alex Kovalev.  Mike Comrie, who's played the last two games, is with the "5th" line of scratched players Eric Tangradi and Eric Godard.  If Letestu can return, that could be a huge addition for a team looking for some skill in the middle.
--Oof, in not so good news:

Jeffrey's been out since the Philly game last week (March 24) and hasn't been on ice since.  It's unknown at this time how bad the knee is and what treatment he might need.  They're probably waiting on swelling to go down to decide on the course of action, hopefully surgery will not be required.