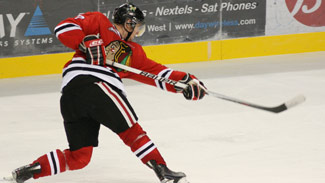 Amongst a flurry of trades in the 2011 NHL Draft, the Pittsburgh Penguins elected to hold tight with their 23rd pick and select defenseman Joe Morrow.

Morrow, from the Western Hockey League, has good size, is an excellent skater and could develop into a puck moving NHL defenseman. In this wide open draft he was ranked by most services in this area, but the Pens did pass up forwards like Brandon Saad (Gibsonia), Nicklas Jensen, Matt Puempel and Ty Rattie.

When many thought the Pens might draft a forward, Ray Shero listened to his scouts and took the defenseman in Morrow. Shero’s earlier management job, as an assistant in Nashville saw them take many defensemen high like Dan Hamhuis, Ryan Suter, Shea Weber, Ryan Parent and Kevin Klein.

Choosing Morrow goes in that mold, several goal scoring forwards were on the board but the Pens went a different route. Morrow will need a few years of development, but his addition to the Pens offers one more blue chip prospect to the team’s portfolio.

As we’ve seen with Ryan Whitney and Alex Goligoski, the Pens aren’t afraid to trade a good defenseman for forwards, so the idea to draft the best player available always works out at the NHL. Now it’s just a matter of time to see how Morrow develops.