Are the Penguins' Wingers better than they get credit for?

Share All sharing options for: Are the Penguins' Wingers better than they get credit for?

Ask anyone the weak spot of the Pittsburgh Penguns, and other than health, you'll the perceived weakness on the wing.

Dan Bylsma has hinted that in crunch time and the playoffs, the Pens will use their successful three center model.  Meaning Sidney Crosby, Evgeni Malkin and Jordan Staal would all center separate lines to give the Pens that unique advantage of strength down the middle.

Tying up that much money on separate lines obviously has affected what a team can spend elsewhere.  But general manager Ray Shero has done well to see that he doesn't have a "helicopter" team (as in, no wings).

--Alex Goligoski was traded for James Neal.  Neal, who struggled without a playmaking center in Pittsburgh is still 23 years old and has scored 24, 27, 22 goals in his three NHL seasons.  Pens fans writing him off as a bum are going to be in for a surprise when he starts potting goals next year aside a skilled center.

--Chris Kunitz, somewhat quietly, ended up with a 60 point pace on the season.  Injuries took him down to 66 games and 48 points, and injuries always seems to be a concern with the style Kunitz plays.  But that style is the perfect one for Bylsma's system and the price to pay for playing such a physical game.

--Neal and Kunitz factor into being today's definition of power forwards, in terms of goals, shots and hits.  If both stay healthy, they ought to definitely make this list next season.  Over the course of this study there are only an average of 11 defined power forwards per season.  If the Pens put two names on the list, that's a tribute to the style of play they like to employ, but also strength on the wing.

--Steve Sullivan was signed from Nashville and is something of a mixed bag.  On the pro side Sully is a proven goal/point producer when he can stay in the lineup and has pretty good hands.  On the con side Sully is 5'8, 37 years old and has only played in 293 out of a possible 492 games since the lockout ended.  His injury past is checkered, but he did play in 82 games in the '09-10 season, so it's not as if he's that removed from a full year.

--Tyler Kennedy and Matt Cooke will return and be the two most interesting wingers to watch, for different reasons.  Kennedy put together a fine statistical season and was one of the offense's main engines when the stars went down to injury.  Will he got a shot to play a top 6 role with a Crosby or Malkin?  And if so, can he continue to score goals?

Cooke, as we all know, has had to face a stark reality- change the way you play, or you're out.  It may be simple to a fan "just don't be an asshole and stop blatantly making bad hits, Cookie", but it's not that simple.  Cooke's made it to the NHL because he plays a certain way.  And he's been employed in the NHL for 13 seasons now under three teams and any number of coaches who have drilled into his head to keep it simple, finish his checks, play hard, skate through players, etc, etc.  It's not so simple as to just flip a switch and become a model citizen, Cooke has to find that line where he can be effective and true to his game but still toe the line of common decency and ditch the cheapshots.

--Left out in the noise is Pascal Dupuis, a guy who can play 1st line to 3rd line, left wing or right and quietly go about his business.  Dupuis' hands will never allow him to be a reliable point-producer, so it's probably time he is removed from Crosby's line, but Duper is still immensely valuable.  His speed will create chances, his defensive positioning and awareness is superb and Dupuis will add some veteran leadership and confidence for what can be a young and emotional locker-room.

--On the younger side: Eric Tangradi has bulked up to 230 pounds and is developing slowly but surely into an NHL player.  Dustin Jeffrey is becoming comfortable as a winger and has a lot of promise as well, and the organization is high on the late blooming Nick Johnson.

Winger won't be the strength of the Penguins, given their current roster, but it's an under-estimated group of players.  To see how little the Pens have gotten from their wingmen, here's a chart of post-lockout points: 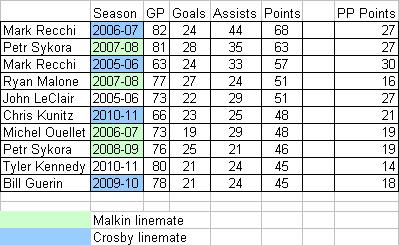 The Pens have only had a winger or two score 45+ points in a season.  For 2011-12, you'd have to say 4 have the skill and opportunity to do so (Neal, Kunitz, TK, Sullivan).  Injuries and cold-streaks could derail some of them, but the fact is the Pens probably have more depth down the flanks at this moment more than any other time since the lockout.

For Team Helicopter, that's not so bad.