If you come to my house, just outside Washington DC and in the heart of the Washington Capitals kool-aid fandom, there is an old, disorganized garage. Inside, if you shuffle through the weed wacker, the Christmas decorations and ancient board games, you would find an old hockey stick. I couldn't tell you the brand because it has rubbed off with age, but its blade is a vivid blue plastic that is duct-taped to the rest of the stick. The size would make an NHLer chuckle, probably remind him of how much time has passed since he once held a hockey stick so small.

I stumbled across that stick not too long ago and I could vividly remember the hours my older brother and I spent on our lopsided driveway. I can remember how I could never quite hit the tennis ball right, sending it into the side of the house and occasionally hitting the window. I can remember how tough my brother was as a goalie and that I could count the total goals I scored against him on one hand. If he was feeling merciful, he would sometimes dress me up in his goalie gear so I could work the pipes against his lethal, 12-year-old slapshot while screaming, "Come on, Laura! Try harder!"

There's evidence of this, of course: 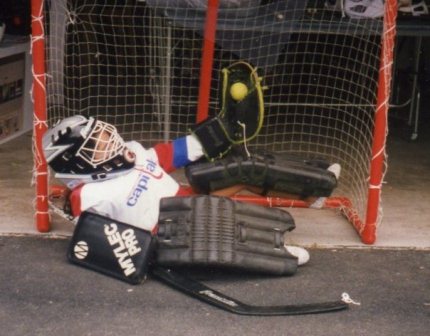 Your eyes aren't deceiving you; I am wearing a Caps jersey (and yes, I am wearing shorts). My brother's Peter Bondra jersey, to be exact. Long story short, he's a Caps fan because his friends are, despite the fact our dad was born and raised in Western PA, black and gold to the core. Dad and I still can't wrap our minds around it either, but in the end, we don't care about the logo on the front of the jersey because that's not the point.

The point is we all love hockey in my house and that's exactly what I hope to bring to every one of my posts as the newest writer for Pensburgh. I write about hockey because I love this darn game and the Pittsburgh Penguins.

NFL, MLB and NBA fans might scoff at how we love a sport so much despite it getting a tenth of the coverage on major sports stations. What makes us so awesome is we don't care, we love our teams just the same.

I'm very excited to join the Pensburgh community, some of you may know who I am from my either my previous stint on Bleacher Report or from my babblings on Twitter with your very own Allie (I totally came up with the the change from 8725 to 874 on her Twitter, by the way). To those of you who have no idea who I am, I give you my warmest Italian greetings and hope you enjoy what I have to say as a hardcore Pens fan, but first and foremost, a hockey fan.

You will get to know me better as I share more of my thoughts, but as of now, you know the necessities. Oh, and I'm unnaturally and unequivocally obsessed with Zbynek Michalek, hence the Z in my name.