Since Max Talbot defected via free agency, we can now close the book on all direct ties for the Pittsburgh Penguins and the 2002 NHL draft.  To be fair, Ryan Whitney was traded for Chris Kunitz and Eric Tangradi, but all the picks from that draft are now done.  With Talbot moving on, a lot of guys bump up a notch on the list of the longest tenured member of the Pens. 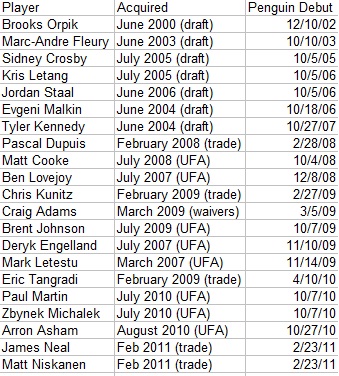 --Only 11 players remain from the Cup team just two years ago, and that includes Ben Lovejoy who didn't factor into the championship in the playoffs.

-Only two players, Brooks Orpik and Marc-Andre Fleury, played for the Pens prior to the lockout.  And they only combined for 107 games with the Pens by that point.  Chris Kunitz, Craig Adams, Brent Johnson, Matt Cooke, Pascal Dupuis, Paul Martin and Zbynek Michalek all played before the lockout for other teams, but the point remains that this is a young team.

--Don't look now but Sidney Crosby already is the longest tenured forward on the team. That didn't take long, did it?

--This goes to show the long trip to the show for Mark Letestu and Deryk Engelland, who both had to claw their way up the depth chart but finally did just that. And Engelland's trip was even longer, since he played for other organizations before becoming a full-time NHL'er.

--This list leaves off Steve Sullivan, who just signed and would not fit in the graphic. But he hasn't yet made his Penguin debut, so we'll leave that at that.