Pens of the Past: Joe Mullen

Share All sharing options for: Pens of the Past: Joe Mullen

Pens of the Past is a little series of features I tossed together during the 2008 offseason.  Seeing as how there's little sense in retyping the same information, I figured I would just push it forward for this offseason as well.

We'll start with one of my favorite hockey stories.  A guy who grew up in a section of New York City known as Hell's Kitchen.  (For the record, it used to live up to the name a bit more.  Not so much these days. That's not necessarily a bad thing. For a visual of the neighborhood take a look at the buildings in Westside Story).  As you can imagine, it's not all that easy to play ice hockey in an NYC neighborhood.

Read on to see how Joe Mullen - or as Mike Lange would call him, "Slippery Rock Joe" - took an upbringing in a tough neighborhood and turned it into a professional ice hockey career. 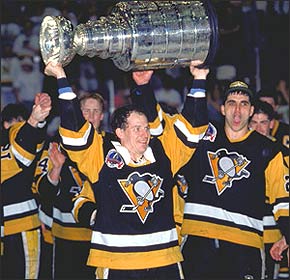 From a personal standpoint, one of my favorite stories about Joe Mullen focuses on how he got his start in hockey.  As a New York native in the grips of Hells Kitchen, that's about as far from an ice surface as Kenya.  To offset the lack of the natural playing field, Mullen tossed on some roller skates, rolled up wads of electrical tape in the shape of a puck and played roller hockey on basketball courts.

Amazingly, Mullen was good enough on ice as well.  So good in fact that he received a partial scholarship to Boston College, where he caught the eye of Team USA coach Herb Brooks.  Despite Brooks' persistence to have Mullen join ranks with what would go on to become the Miracle Team, Mullen remained loyal to his own dreams.  He accepted a contract with the St. Louis Blues and made his NHL debut during a playoff game with the Blues in 1980.

It wasn't until 1990 (just in time for a cup) that Mullen rocked the black and gold.  As mentioned among the likes of players like Rick Tocchet, Larry Murphy and Ron Francis, how many 100-point players can you have on a team with guys like Lemieux and Jagr?  Fact is, you just can't.  That's why Mullen dug in as that consistent 70-point-plus guy.  The sort of guy you can rely on during clutch moments and the sort of guy you can turn to when a big-time starter went down.

Mullen's best season for Pittsburgh came during the 91-92 campaign, a season that found Lemieux in only 64 games.  With clutch demeanor, Mullen tagged 42 goals and 45 assists for 87 points.

In 1996, Mullen was traded to the Boston Bruins after five seasons with the Penguins.  Yet he would ultimately close out his career back in Steel Town the following season when he signed once again with the Pens.

One of Mullen's greatest achievements comes with the consistency angle.  Mullen is only one of a few select American-born players (six) who averaged one point per game throughout their career.  Brian Leetch, Jeremy Roenick, Mike Modano, Pat LaFontaine and Phil Housley are the others.

In 2000, Mullen was deservingly inducted to both the United States Hall of Fame and the Hockey Hall of Fame.