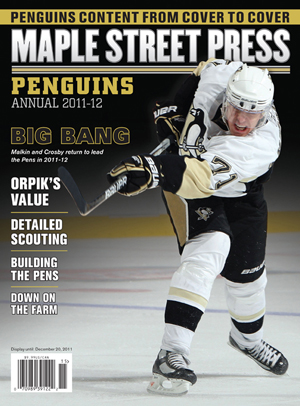 A typical summer in the hockey world may be a period of down time for the players, teams and hey, a lot of writers too, but this offseason was a bit busier than the previous ones around these parts. In June I was presented with an opportunity to put together a Penguins annual magazine through Maple Street Press. This is the first time they ventured into the Penguins realm, although they have published annuals for the Steelers and Penn State as well. I was more than happy to be the one to gather up a group of writers to contribute to the issue. It hits shelves at B&N, various book stores and news stands in and around Pittsburgh on September 13, but you can order your copy now through Maple Street Press' site.

Odds are I'll have some free copies to give away down the road as well. Without getting too far into the vivid details of each article, the mag is a 112-page season preview surrounding everything Penguins related. It starts off with a collection of short bios/quick hits for the top players in the team (with a few "players in the system/on the fringe" as well), before segueing into some great full-length stories courtesy of some people you may know from the interwebs and Penguins blogoshphere.

List of stories and staff writers after the jump:

Stephen Catanese of SBN Pittsburgh was a huge help on the project, knocking out bios, editing some stories and piecing together a great piece on the evolution of Brooks Orpik.

Brian Metzer over at Kukla's Korner tackled a story on the the up-and-down tendencies of Marc-Andre Fleury.

Marky Billson focused on the continued growth of the Zbynek Michalek/Paul Martin pairing.

Pensburgh's own Laura Falcon put together a nice story on the history of Mellon and the future of Consol Energy Center, while Tony Androck supplied a few bios and our boy Hooks focused on Kris Letang and his excellent season in 2010.

Jesse Marshall from Faceoff Factor revisited the draft and took a look at the history of Pittsburgh's draft picks.

Mike Chen from SBN's NHL hub wrote a solid piece on Matt Cooke and what fans will potentially see from a reformed player.

Mike Colligan from Forbes.com and the Hockey Writers goes inside Dan Bylsma's system and uncovers what it means to wear the Black and Gold and how HCDB builds a Penguin.

Dan Scifo of the Latrobe Bulletin gives an in-depth season preview look at the Penguins.

Jonathan Bombulie from the Citizen's Voice does the same for the Wilkes-Barre/Scranton club.

Dirk Hoag from On the Forecheck crunched numbers in a By the Numbers piece that really uncovers just how good Sidney Crosby really is in tough situations and how valuable Tyler Kennedy remains to the Pens.

Yahoo!'s Sean Leahy highlights Jordan Staal and what his presence has meant to the Pens in the past and what it will continue to mean down the road.

Angie Carducci from InsideHockey.com gives a classy goodbye to Mark Recchi after his 22-year career came to an end in June.

And I went with the return of Sidney Crosby and Evgeni Malkin and revisited the Jagr and Talbot drama of the summer.