Share All sharing options for: Penguins Breakout Player of 2011-12

It's not news that the Penguins are a very veteran team, in terms of NHL experience. Marc-Andre Fleury is a franchise goalie, Brent Johnson is an established and entrenched backup. The top four D is littered with pros- Brooks Orpik, Kris Letang, Zbynek Michalek and Paul Martin. Up front with Sidney Crosby, Evgeni Malkin, Jordan Staal, James Neal, Chris Kunitz, Tyler Kennedy, Matt Cooke and company, there are plenty of tried and true NHL'ers.

Which makes looking for the next breakout start pretty tough. Mark Letestu has shown his worth and even guys like Ben Lovejoy and Dustin Jeffrey have played in the NHL at times for a few years.

Still Pittsburgh has a few candidates for young players who will have the chance to establish themselves and have breakout years. It has to be taken in context- none of these guys are going to be up for an end of season NHL award, so take it with a grain of salt. But who can take the next step to establish themself as a solid pro?

Eric Tangradi is an obvious choice. He's admitted he's up to 233 pounds and has the experience and shape to take the next step. If Crosby can not start the year, there's also one more roster spot available that a guy like Tangradi can use to make the NHL team out of camp.

Though still green, Tangradi has shown brief flashes in the NHL that he can use his size and ability to be a contributer. But does he have the consistency? Will he be able to get the opportunity right off the bat? That seems to be the biggest question.

Tangradi might have an ace up his sleeve- in losing Mike Rupp to free agency and signing Steve Sullivan, the Pens will be smaller up front. And Dan Bylsma, like all hockey coaches, love size and players who know how to use it. Tangradi also showed chemistry last pre-season with Evgeni Malkin. Can those two re-establish that connection once the calendar pases September?

Even then, Tangradi could slot into a 3rd liner well- without the pressures for point production and be able to work on the power play in front of the net. Chris Kunitz tries to screen the goalie, but Tangradi has more size and better hands and touch for goal scoring.

Dustin Jeffrey has turned from a 6th round pick into an NHL career before ACL surgery last March. Though he has played in the NHL for parts of three seasons and has the opportunity to stick in the show.

Jeffrey's only question mark is his knee. Though he's said he will be ready to start training camp, it's important to remember he'll be only six months off a very serious surgery. There have been many advances in medical technology, many athletes have said it takes 12-18 months to "feel like myself" when they have such a procedure.

Still, Jeffrey earned the trust of Dan Bylsma in his play, and has shown he can fit in at the NHL. The injury question looms, but DJ has done enough to where the team basically considers him an NHL player. Plus, he's waiver eligible now. They can probably getting away with starting him in the minors for a brief rehab stint, but that's only a band-aid. More than most of our breakout choices, Jeffrey probably figures to get the most NHL time right off the bat, if his knee holds up. 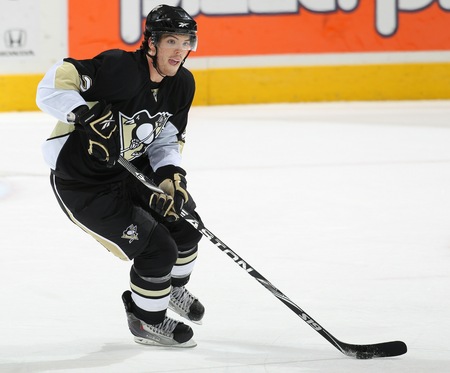 He doesn't even have a SB Nation profile yet, which shows you how far Simon Despres has to climb. His pedigree to this point is off the charts for a 20 year old defenseman: former first round pick, final cut in NHL camp last year, Team Canada WJC member, and the alternate captain and #1 defenseman on the Memorial Cup winning St. John Sea Dogs.

Despres is a smooth operator, he skates extremely well for a 6'4 player, he can move the puck, he can shoot, he has good defensive awareness in his own end with his stick and positioning.

The knocks on Despres have been his decision making, physiciality and his experience. All of these issues can be naturally addressed in the AHL, where Despres is almost certainly going to start his season. The Penguins have seven NHL defensemen (counting Matt Niskanen, Ben Lovejoy and Deryk Engelland) and also some veterans with NHL experience in Boris Valabik and Alexandre Picard. Not to mention prospects like Brian Strait and Robert Bortuzzo, both in their third pro seasons and both with legitimate NHL futures.

Despres has a tall hill to climb, but if his performance continues to ascend like it has in previous years, it'll be hard to keep him in the minors for long. The Penguins have a history of keeping young, stud defensemen in the AHL longer than they deserved to be there (Brooks Orpik, Ryan Whitney, Kris Letang and Alex Goligoski). And all the players that came before Despres had the advantage of playing on less than stellar defensive units.

All this detail, now it's time to vote and discuss. Who has the best chance of being the Pens breakout player for the 2011-12 season?