Have Recent Re-signings Set the Market for Jordan Staal?

Share All sharing options for: Have Recent Re-signings Set the Market for Jordan Staal?

Now that this off-season has settled down, it's not too early to shift eyes to NEXT off-season already. Oh come on, I hear the grumbles already. Yeah, this is a little too far-sighted, but literally nothing else is going on in the Penguins world, so humor me..

Next July 1st, the Penguins will be able to negotiate and sign Sidney Crosby and Jordan Staal to new contract extensions, if they so choose. Both players are signed through 2012-13 and will finish out their respective contracts before any extension kicks in. On July 1st, 2013 both are set to become unrestricted free agents. The following year, in 2014, Evgeni Malkin (and Kris Letang) will see their current contract ends.

While most the attention has naturally been on Crosby, it could be Jordan Staal that we should be looking at. Thanks to a healthy increase in the salary cap, a lot of marginal players cashed in for big bucks on the free agent market this summer. $4.5 million for six years for Tomas Fleischmann and Ville Leino! Erik Cole will turn 33 in November, but that didn't stop him from getting $4.5 for four years.

These contracts were inflated, and let's hope that Jordan Staal doesn't make it onto the market. The recent signings of two players are a little more relevant. Like Staal, they are not the stars of their teams. But they are very good "core" guys, solid two-way players and have shown constant improvement over the years. In short, they're the type of players a team needs to be successful. 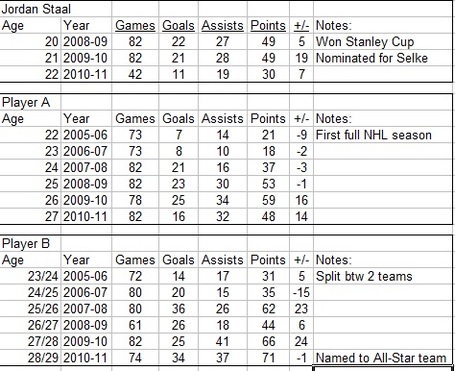 Who are these mysterious players A and B?  And how did they, by not opting to test the UFA market, set the stage for Jordan Staal's next contract?  Take the jump and find out..

The first thing you may note is Staal's just coming into the time period of both of these players.  The other thing that needs to be mentioned is both of these players have put up the points for 59, 60+ point years.  Can Staal get to that level of production?  That will have to be the question the Penguins will pay him on.

The cost is the big question.  Pittsburgh and Ray Shero have been very pleased with Staal and held him in high regard.  Player A, Brooks Laich, just re-signed with Washington for $4.5 million for six years.  Player B, Patrick Sharp, just today signed with Chicago for five years and $5.9 million a year.

Sharp's a goal-scorer and those gaudy numbers helped to push him up.  Laich gets a significant amount of power play time, as well.  But I think $4.5 - $5.9 could be the realistic range for Jordan Staal's next contract, with the salary cap going up.

Looming over all of this is the collective bargaining agreement will expire before the 2012-13 season starts.  With a ton of uncertainty, will the Penguins act aggressively to lock up Staal and Crosby before the CBA negotiations take place?  Most expect long-term contracts and front-loaded contracts to be heavily discussed and possibly outlawed, but at this point who knows how that may go.

It's never to early to think ahead, and rest assured the Pens have already started mapping out their strategies and scenarios for how the constantly moving pieces will slide into place.  In the comments, what should the Pens do with Staal?  Obviously he's the second priority behind Crosby, do you let Staal play it out to see how his production goes?  Or lock him up as soon as possible and hope the salary cap continues to increase?