In his '30 Thoughts' Elliotte Friedman points out AHL players on hot streaks might be able to take jobs from NHL players if the lockout ends. Could that be the case in Pittsburgh? We look at the bubble players and how some are doing out in Wilkes-Barre.

Elliotte Friedman hits again with this 30 Thoughts, and one stood out to us.

19. One thing to worry about if you're a locked-out player is if someone on your NHL team's affiliate improves enough to take a job. This is one of those years, like 2005, where the AHL gets so much better because of who is playing down there. One exec said: "Most teams have two or three players they are looking at now who will make them think when the NHL returns."

Which got us to wondering, how are things down on the farm? 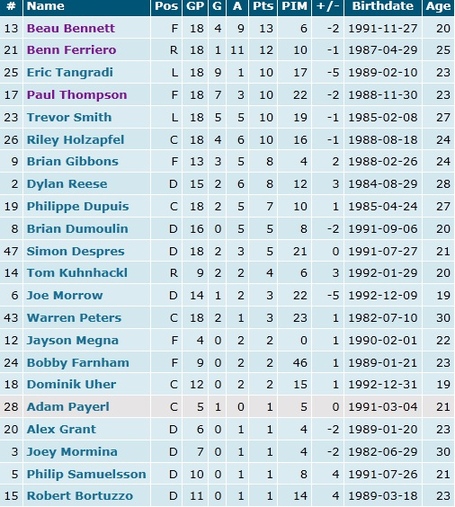 (screen-grab from hockeydb.com) Beau Bennett, in his first year as a professional, has made some good plays and been productive, but anyone who’s seen him play realizes he’s still very green and has a way to go in terms of growing into the pro ranks before he’ll be ready for NHL action. Due to injuries Bennett only played 10 collegiate games last season and needs all the game-time he can get. He’s not quite ready for prime-time just yet, so he’ll be remaining in Wilkes-Barre this year.

Benn Ferriero could be a name to watch though. In the past three seasons he’s appeared in 92 NHL games with San Jose, sometimes in cameo scoring line roles (including a 7 goal, 35 game NHL campaign last season). Ferriero sort of has Dustin Jeffrey syndrome- he's not the biggest, doesn't have the most skill hands, isn't terrible physical or the typical "bottom six" type forward. But he is a very good skater, has some NHL experience and has been a "shot in the arm" type guy before. What he hasn't been is a consistent NHL threat, and given that he wouldn't have to clear waivers again this season (and a guy like Jeffrey would), that might limit options. Regardless, if a 2012-13 NHL season were to ever begin, you'd have to have Ferriero in your top list of callups for forwards.

Eric Tangradi’s always in the “will he/ won’t he” dance for NHL playing time, but after scoring so poorly in the NHL last season, at least he’s down on the farm potting some goals. Given his waiver status, Tangradi will likely be an NHL’er (like it or not) for another chance to prove he belongs.

Paul Thompson has almost equaled his whole goal total from last season already, but at this point he’s still not going to beat out someone with a one-way contract for an NHL job, particularly in the bottom 6 where guys like Tanner Glass, Craig Adams and Joe Vitale are bringing some form of grit and, PK’ing ability as well. And the same could be said for Trevor Smith, Riley Holzapfel and the rest of the forwards.

Defensively it’s largely assumed the Penguins will carry 8 healthy defensemen, with Brian Strait and Robert Bortuzzo graduating to the NHL full-time in large thanks to their waiver status expiring. Simon Despres isn’t lighting the box-score on fire, but most reports have him as playing fairly well in a large role so far this season. Is it enough to convince the Pens they can move on and trade/waive a guy like Ben Lovejoy?

And, maybe best of all, new face to the organization Jeff Zatkoff (a 25 year old who played his first three pro seasons in the LA Kings' system) has a 8-5 record with a 1.62 GAA and .938 save percentage on the year. And a hat-tip to the Citizen's Voice who points out in the month of November those numbers are 7-1, 0.99 GAA, .963 save %. Out of this world. Zatkoff isn't going to beat out estbalished vets Marc-Andre Fleury and Tomas Vokoun no matter what he does during the lockout, but his tremendous performance is worthy of mention.

At this stage it’s hard to predict the thoughts of Dan Bylsma and Ray Shero, harder still without a CBA agreement and knowing the parameters of what they might be working with, but from Zatkoff to Bennett to Despres and beyond, Pittsburgh definitely has it's eyes on how the players are developing and performing on the farm during the lockout.