Share All sharing options for: Peter Taglianetti takes your questions 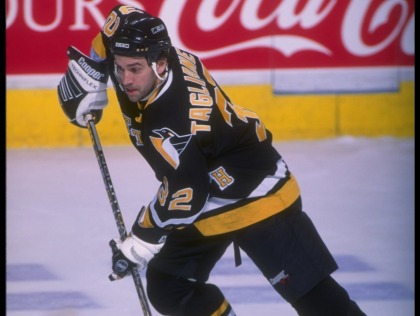 Through the wonder and majesty of the internet, former Penguins defenseman Peter Tagliantti has agreed to do a Q & A with Pensburgh.

Taglianetti, 48, provided a physical presence on the Penguins blue line for parts of five seasons. He was a member of both the 1991 and 1992 Stanley Cup-winning Penguins teams, notably playing through injury with the aid of peanut butter during the 1991 playoffs.

He finished his NHL career with 451 regular season games played, 92 points and 1106 penalty minutes. Yeah, he got in a few scraps. He also (unsuccessfully) attempted to bodyslam Yokozuna in 1993.

Don't worry. Lex Luger flew in on a helicopter and slammed Yokozuna a short while later, saving the Fourth of July.

When it came to fighting, Taglianetti fared better in non-scripted brawls against opponents who weighed under 500 pounds.

Taglianetti still lives in Pittsburgh and is the father of current Pittsburgh Panthers safety Andrew Taglianetti.

Peter is responsible for perhaps the most entertaining, forthright Twitter account of any ex-Penguin at @PeterTags. On his website www.PeterTags.com, he occasionally blogs about hockey and sports in general. He is also one of the driving forces behind POWERPLAY, a series of hockey-specific training videos.

Instead of just throwing typical questions at Taglianetti, we're going to pick a handful of the best questions proposed by Pensburgh readers, mix them with a couple inquires from Pensburgh bloggers and send the resulting mess Tags' way. Ideally, that resulting mess will be very atypical.

In the comments section of this post, ask anything (within reason) you'd love to hear Peter respond to.

Wondering what it was like winning two Stanley Cups with the Penguins? Or how it felt getting shipped to Pittsburgh with Larry Murphy in 1991? Being picked by the newly minted Tampa Bay Lightning in the 1992 expansion draft? How about who the toughest guy he ever fought was? How disappointed was he that he couldn't slam Yokozuna? How, as a Winnipeg Jet, did he go from a -23 in 1988-89 to a +20 in 1989-90? Which current NHL player would he love to lay out with a picture perfect hip check?

The world is your oyster, if the oyster is asking Peter Taglianetti questions and the world is the comments section.

If you see a question that you think would be interesting, hit the 'Rec' button (it can be found after clicking 'Actions' for those unfamiliar) under that comment. It'll make it easier for us to pick out what people would like to see answered

The deadline for submissions is Thursday at noon.