So I'm walking to work today in San Francisco, and I pass a pretty lady sitting down at a table eating her breakfast with her hideous Penguins bag and scarf. (Why did the team ever go away from yellow and adopt that corpse-like puke-bronzish "Vegas gold" color anyway? Yellow was good enough for Lemieux. But I digress...) And I say to her, "I don't normally say this, but I'm a Caps fan, and I hope you beat the Sabres tonight." Which she loved.

So for one day, let's all set our differences aside and root wholeheartedly for your gang. Because the Caps really need this one, fellas. Put one to the Sabres, and the Caps season might just continue past game 82.

And besides, it's in your interest. In the unlikely event that either the Sabres or Caps find some way to get past the Rangers or whoever they draw, which one would you rather face later in the playoffs. I think the answer is pretty clear -- have you seen the Caps this year? Yeeesh. 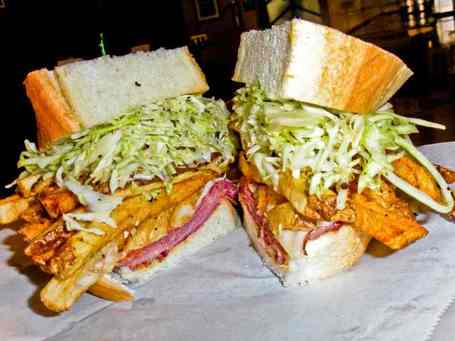 So if you're in Northern California and want the next best thing to Primantis, maybe a meetup can be organized sometime. If I can make it, I will, and you can all take shots at the Caps fan.

Cheers, and Go Pens! (this offer good only tonight)