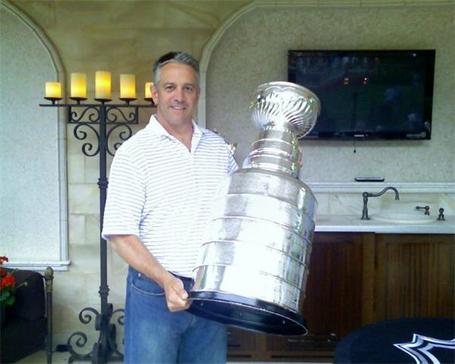 A few weeks ago we asked readers to submit questions to ask former Penguins defenseman Peter Taglianetti. Here are the answers to those questions.

When you're done, check out Peter's website. He can frequently be found sharing his unique insights on sports and hockey there, or as a guest on 97.3 the Fan. Peter is one of the driving forces behind POWERPLAY, a series of personal training videos crafted specifically with hockey players in mind.

Anything in parenthesis is commentary or clarity added by me.

1). (Submitted by Carbonite) Outside of winning the Stanley Cup, what is your favorite memory from the time you spent as a Penguin?

I don't think you can pin point just one thing because everything is so intertwined. Being part of the overall experience of transforming the Pens from a good team and a good organization to a great team and an elite organization (was special).

2). (Submitted by cyroose) What was the best prank you saw in an NHL locker room?

Back when there was wooden sticks, we used to saw half way through the stick and rewrap the stickers around the saw cut, and then just watch the player fall down. It was childish, but fun.

3). (Submitted by wg1of5) Do you have any particular advice for a young defenseman hoping to play DI collegiate hockey this fall?

Find your niche and exploit it. The problem is that everyone wants to do everything. Find the one thing you do well and get better at it.

4). (Submitted by wg1of5) What were the biggest differences you encountered between high school/junior hockey and collegiate hockey, and between the collegiate and pro games?

The size and speed of the players. In high school you are the best, you go to college and you're suddenly one of the 24 best players, and have to make that climb and starting that process over again. It's the same thing at every level you go to.

5).(Submitted by docciavelli) In 1994-95, your last season with the Penguins, Richard Park was called up from juniors and played a couple of games during the regular season and playoffs. Do you recall Park's style of play back then?

Richard was a smallish guy but was able to skate very well. He used a very long stick, same as Mario's, and was able to use that to his advantage.

6). (Submitted by docciavelli) You played your final year of professional hockey with the Providence Bruins in 1995-96, and just so happened to be a teammate of Peter Laviolette. Did anything seen from him on NHL 24/7 this year surprise you at all?

He was a career minors guy, and never goy a shot to play in the NHL. He's a very smart guy and utilized that ability to start a coaching career.

7). (Submitted by docciavelli) As an ex-Winnipeg Jet, were you excited to see the NHL return to the city?

Very much so. It is a great city and it was devastated when they left, but that was mainly because of the Canadian dollar and economy (back then).

8). (Submitted by me (obviously)) How did you get involved in the WWF's Yokozuna Body Slam Challenge on the U.S.S. Intrepid on July 4, 1993? It's always kind of funny going back and seeing you as the first guy who "couldn't" slam Yokozuna.

The year I played in Tampa, I was able to befriended Jimmy "Mouth of the South " Hart. So when they put it together, Vince McMahon called and I jumped at it. My kids were into wrestling at the time. I did it mostly for them.

9). And an even more random final question from docciavelli... you played with Chris Terreri at Providence College. Were rumors true that, even at 5-foot-9, Terreri could dunk a basketball?

Not only could he dunk a small basketball, but he also played Jai alai.

(Not sure what Jai alai is? I wasn't either. until I looked it up and recognized the images. Here's a 22-year-old documentary on the sport.)

Big thanks to Peter for taking some time out to do this for us. He's on Twitter @PeterTags and tweets very actively, almost without fail, during Penguins games.