Playoff Time: Together, We Prepare for Battle

Share All sharing options for: Playoff Time: Together, We Prepare for Battle

It takes courage to fully invest yourself in a sports team.

Call me dramatic, especially since words like "courage" should be lined up with our armed forces and firefighters, but there's a certain risk proclaiming to the world your loyalty to a sports team. Only hardcore sports fans will understand this.

As of late, Pens fans have come upon wonderful times. Sidney Crosby has finally returned and taken a few heart attack-inducing hits without regressions; Evgeni Malkin capped off an incredible story that started with an ACL/MCL tear and ended with a 50-goal season and the Art Ross Trophy; Marc-Andre Fleury is at the top of his game.

The Pens are, for the most part, healthy and recent incidents have added heat to an already fired up team. A team prepared to avenge last season that made them impertinent to hockey.

We're confident and (hopefully) not cocky, but an easy is not what lies ahead. For many of us, we sacrifice bits of our social lives to sit in front of the tube two and a half hours on a Friday evening. We spend our mornings at work sipping coffee and reading updates about team practices. When the team loses, we hurt. When they win, we rejoice. Whether we like it or not, we are linked to our favorites teams. It can be scary, putting us in a very vulnerable position at times. Like a relationship, we put our souls out there and allow ourselves to care wholeheartedly, not knowing what the return will be.

Nevertheless, we're ready to face whatever the hockey gods throw at us during the playoffs.

I've seen infinite articles by angry writers about the inappropriateness of fans referencing their favorite teams using "we."

"You aren't on the team or an employee," they would say. And buying paraphernalia doesn't do the job either. While I understand the sentiment, I beg to differ.

Fans may not be a part of the team, but that doesn't mean they are completely independent of what happens on the ice, as I noted above.

When we care, we're all affected irregardless if it's in a direct or indirect way. When terrorists attacked the United States on 9-11, those brutally murdered and the families they left behind weren't the only ones who suffered that day. We mourned as a nation and even beyond that. Why is that understandable? Because we're humans. We can put ourselves in the shoes of those directly affected by the attacks and feel (even if not to the fullest extent) the ache they feel. At the same time, there were many who were not affected at all because they didn't care.

When I say, "We won the Cup," I know that my name won't be engraved alongside the NHLs greatest hockey players of all time. But what I'm feeling when Fleury stops Nick Lidstrom's shot in the final seconds of Game 7 is nothing short of championship bliss. It's my own Stanley Cup victory and you better believe I am laughing, crying, and cheering as if I won too. In my mind, I did win because I was with them every step of the way.

For the out-of-towners (like me), those wins become all the more meaningful because losses are twice as hard. I live just outside of Washington DC and don't get me wrong, this area is very much a Pens Nation, but it remains Capitals territory. Enemy territory. As such, the support system when you lose isn't as strong. In fact, it's a nightmare, the name-calling, the "Ovechkin is better the Crosby" joke of an argument, etc. I have to go on the defensive at times, countering any attacks coming from my fellow friends who are Caps fans. They don't attack Jen Bullano, the Pens' director of communications, they attack me and I have to answer as if I represent the team because, in a sense, I do.

It may suck, but we deal with it, because we know it's worth it in the end.

So as we tuck away the successes and mishaps of the regular season, we now prepare for the moments that count. Men put away their razors, lucky socks leave their place in the back of the drawer, evening plans are canceled, and Pepcid is purchased in bulk. Psychologically, we expect the best, but we prepare for the worst. We wonder how we're going to survive the next few days and if we'll earned the right to do it against in the next round.

Pens fans, today is our final day of rest. Tomorrow, the enemy marches onto our territory, determined to mark is as their own. Our troops will fight them and ultimately they will bring us to victory or defeat, but we aren't hopeless bystanders. From all corners of the world, be it inside Consol or behind our computer screens, it is our job to unleash hell from the moment the puck drops.

If the Pens go down, we go down with them. And if they are the chosen ones to raise the Cup, we raise it with them... from our couches. 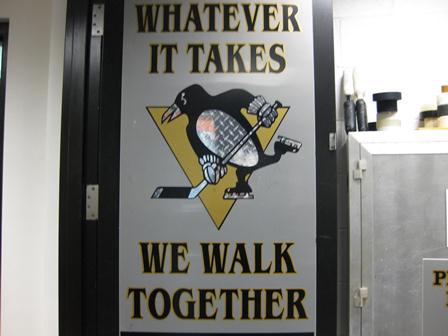