Rob Vollman of Hockey Prospectus ("and friends", as the title puts it) recently released player usage charts (warning: big PDF) for the 2011-2012 NHL season. This thing is chock-full of information that's fun to look at due to the friendly graphical presentation.

Basically, it's set up as follows, everything here being for even strength 5 on 5: 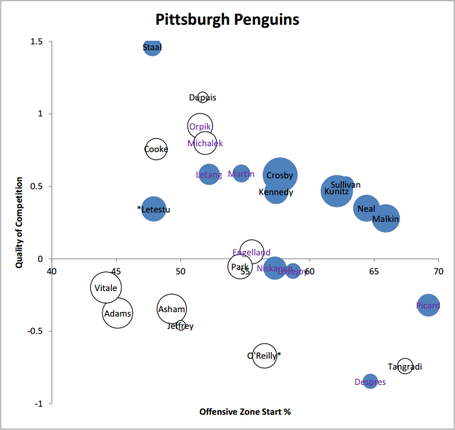 Some analysis after the break.

Let's keep something in mind here: while all of this data is useful and interesting, we cannot forget that most of this data reflects usage, not talent or ability. For example, if Bylsma decided to use Vitale to play big minutes against the other team's top line in exclusively defensive zone starts, he could do that. Vitale's usage stats, specifically Qcomp and zone start would change accordingly. His bubble, then, would be in a different spot and through no fault of his own. However, one would expect his bubble to stay white and expand to indicate that he struggled horribly against that kind of usage.

So, bubble placement comes from the coaching staff, but bubble size and color come from the player's ability.