Imagine, if you will, that you tuned in to the NHL awards ceremony, but rather than hearing Chad Kroeger sing about being drunk, the show was about the awards and the players who won them rather than a half-baked spectacle that takes a lot of time to do not a whole lot of anything.

Well, I might not be Ray Liotta or Will Arnett, but I can present some fake awards with the best of them.

Seven of the PensBurgh staff (Hooks, Stephen, Lavender, GoPens!, LauraZ, tehchico, and myself) participated in the voting. Discussion of the voting itself will come once the NHL publishes their own voting results so we can see how different things really were. Without further ado, in reverse order of the original list of finalists, just to keep some suspense up...

...for the coach adjudged to have contributed the most to his team's success. 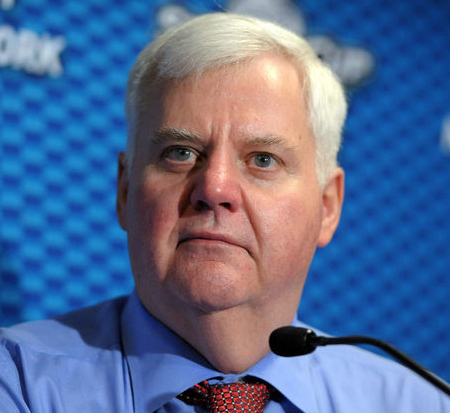 Ken Hitchcock is PensBurgh's Jack Adams Award winner after he led the St. Louis Blues to a 43-15-11 record, putting them first in a Central Division most thought was Detroit's to lose. Despite winning a Stanley Cup with Dallas in 1998-99, this would be Hitchcock's first Jack Adams Award if it were real.

...for the player adjudged to have exhibited the best type of sportsmanship and gentlemanly conduct combined with a high standard of playing ability.

Not only did Matt Moulson score 36 goals for a team that tied for the fewest goals scored in the Eastern Conference, he did so while only taking 6 penalty minutes in all 82 of his team's games. That's just flat-out ridiculous, and if there's ever a time this award should avoid the Pavel Datsyuk/Martin St. Louis logjam, it's this year.

...for the player selected as the most proficient in his first year of competition in the National Hockey League.

In perhaps the most contentious bit of voting this year, Gabriel Landeskog of the Colorado Avalanche takes the PensBurgh Calder Memorial Trophy. Landeskog's unexpected combined all-around skill on offense and defense pushed him over the edge here over the perhaps likelier suspect in Ryan Nugent-Hopkins.

...for the forward who demonstrates the most skill in the defensive component of the game.

Patrice Bergeron, a name I completely omitted from my personal ballot ended up taking the Frank J. Selke Trophy. I will admit disappointment that our own Pascal Dupuis didn't take home the hardware, but nothing bad can be said about Bergeron's solid play in the defensive end. He started more than 50% of his shifts in the defensive zone, faced reasonably tough competition, and dominated it.

...for the defense player who demonstrates throughout the season the greatest all-round ability in the position.

It seems that every year there is hand-wringing about whether the James Norris Memorial Trophy should really go to an offensively-gifted blueliner, but PensBurgh voted emphatically in favor of the young Senator from Landsboro, Sweden. Doesn't kill penalties? We didn't care.

...for the goaltender who is adjudged to be the best at this position.

While this wasn't exactly a consensus pick, it also comes as no surprise. "King" Henrik Lundqvist had a stellar year and faced stiff competition in the Atlantic Division.

...for the player adjudged most valuable to his team.