It's such a tease to be talking about power rankings when we're in the middle of this negotiation mess, but it at least gives us something to talk about.

Scott Burnside released his Week 1 Power Rankings, obviously heavily influenced by any offseason trades/acquisitions and playoff results. However, I was a little surprised to see the Pens in the top three: 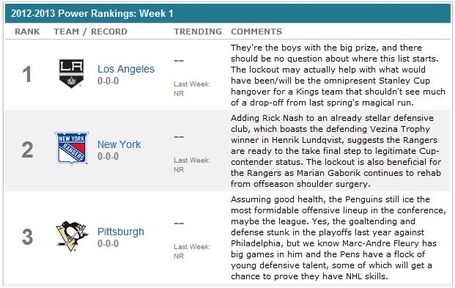 The greatest gift this offseason for Pens fans has been Sidney Crosby's consistent health despite a very intensive workout regimen. I remember when Crosby was first cleared by doctors to workout and every one of us monitored social media closely to make sure the word "setback" never appeared in morning updates. Those fears are out the window. Crosby's apparently in the best shape of his hockey career and the duo of Evgeni Malkin and James Neal surely give the Pens a top notch offensive lineup, as noted by Burnside.

But our loaded offense wasn't the reason for my surprise.

Burnside points out that "yes, the goaltending and defense stunk in the playoffs last year against Philadelphia, but..." But? I would have ended that sentence after Philadelphia. Point being is, yes, defense and goaltending was embarrassing in the 2012 playoffs (and in 2011 and 2010), but what did we do about it? Not too much.

For the record, I'm not concerned about Marc-Andre Fleury. I'll stand by him and signing Tomas Vokoun will give him a chance to sit out a few more games than his exhausting last season. To be honest, I'm not "concerned," period. I am, however, intrigued that 1) Burnside is putting this much faith in the Pens' defensive prospects and 2) that the Pens' recent showings in the playoffs seem to not play a hand in their rankings.

Do you think both of these should be weighed just as much as the Pens' stellar offense? I don't see why not. In fact, I would even say it's more important since offense was never a problem in the first place, even when Crosby was coming in and out of the lineup. Neal and Malkin (with secondary help from Jordan Staal, Pascal Dupuis, and Matt Cooke, to name a few) carried the team until the Pens were granted the extra offensive gift of a healthy Crosby. Defense, on the other hand, was a major reason for the Pens' early playoff exit.

In the end, does the ranking matter? Absolutely not, but do you think the Pens should be getting so much credit for consistent lackluster performances in the playoffs when improvement lies with prospects who still need to make their mark? I can't help but wonder why the Pens seem to get a pass here when the problem has been so glaring and damaging to their playoff success the last few seasons.