A look at a burgeoning new advanced stat metric zone, zone exits. We have the data from four of the Pittsburgh Penguins games and it goes to show some depth of how players are playing.

One cool thing about this day and age is the new things you can learn. Advanced stats in hockey are growing, and one new metric popping up is zone exits. What is a zone exit? Pierce Cunneen, on twitter and on nhlnumbers.com has sent me a ton of data, you can start here with his introductory piece.

He adds a little more, via email saying:

"The inspiration for the zone exit tracking project was the work done on zone entries by Eric Tulsky. While his work focused on entering the zone, I wanted to focus on what leads to zone entries, which are zone exits. Thus, over the summer I created the zone exit tracking project. I created a set of tracking guidelines, recruited hockey fans like myself who were interested in hockey analytic concepts, and enlisted the help of Joshua Weissbock to create a database where we would upload all the data and do calculations. As of now, I have trackers from over 10 teams who are tracking zone exits for their favorite NHL team.

Our trackers have a variety of methods for tracking. The tracking process does require the ability to pause and rewind in certain circumstances, but in general tracking takes only slightly longer than actually watching the game, so many of our trackers will track zone exits for their team as they watch the game live. Our trackers record the time of the exit, the exit type, and the player who made the exit. All of this data then is put on a spreadsheet, which then is uploaded into the database.

The second thing we can do with zone exit data is team evaluation. We can look at which teams are consistently keeping possession of the puck as they leave the zone vs teams that just chip the puck out.

From that database, I was able to combine four of the Penguins eight games so far, the results below, with green highlights added for effect for those near the best on the team for the respective columns: 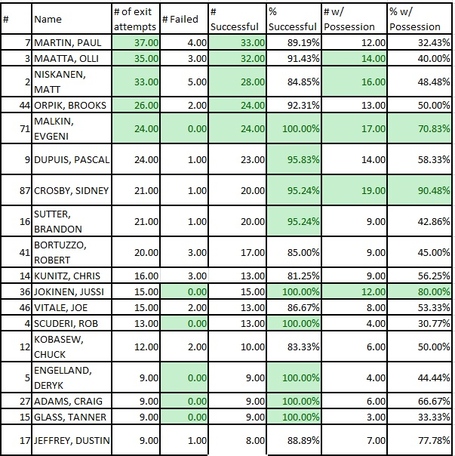 What can this tell us? Here are some points I found interesting (remember all data is for 5v5):