The Penguins went into the Prudential Center in Newark, NJ on Saturday night to take on the Devils. They gave up a lead in the 1st, storming back to tie it in the 2nd, ultimately losing by a score of 4-1.

The Penguins were looking to string together another win after defeating the Nashville Predators on Friday night. Jaromir Jagr (2 goals) and the Devils thought otherwise.

Almost a Moment: Just over one minute into the game, the Penguins line of Jokinen-Malkin-Neal entered the zone and created a good scoring chance early.

Malkin brought the puck in wide, and attempted to get the puck to James Neal. Jaromir Jagr, coming from behind, was able to get a stick on the pass. The puck kind of sat in a dead space, but Jokinen jumped in and got the puck to Malkin in front of the net. A few feet/seconds sooner and Malkin would have had a great chance at a goal against Martin Brodeur.

Crosby Appreciation Moment: a moment that had no bearing on the game, but still worth noting. Sidney Crosby is such a treasure to watch, that the little things he does can sometime be taken for granted.

Plays like this in your own defensive zone to move the puck into the neutral zone is so underrated.

Set Faceoff Moment: Zach Sill won a face-off clean, to Pascal Dupuis. It was a similar draw to Fridays' game when Sutter won the draw, and D'Agostini set up Dupuis for a goal. Sill's win had the puck on Dupuis' stick at the face-off circle edge, but he couldn't get the shot off. Seems like a set play that is becoming more widely used.

Bloody Moment: Chris Kunitz got hit in the face with a puck by Marek Zidlicky.

And bled on the bench. 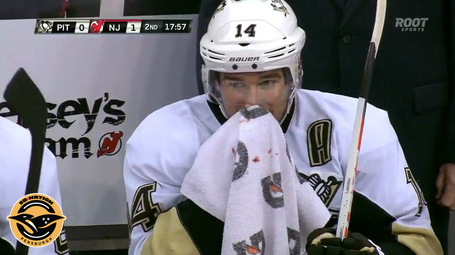 And then he scored a goal.

Slick move by a smart hockey player to get the puck over Brodeur.

Joe Vitale was scratched in favor of Zach Sill, who made his NHL debut.

Deryk Engelland in the lineup again as a defenseman, the 2nd game in a row. Robert Bortuzzo scratched. He crushed Eric Gelinas.

The Pens dominated the 1st period and gave up a late goal to Andy Greene: a bouncing puck that found its way between Fleury's legs and trickled across the line.

Kris Letang took a shot off the hand and was in a little pain. Didn't seem any worse for wear afterwards.

Brodeur played out of his mind in the 3rd period.

Letang did not play well in the 3rd period.

Jagr scored to make it 3-1, and capped the night with an empty net goal to make it 4-1. Continuing his role on Earth to troll the Penguins for eternity.

The Anaheim Ducks come to town on Monday. #TeemuForever

'Memorable Moments' is a mini-recap, posted after each game, featuring GIFs & breakdowns of some plays. You can chirp @MikeDarnay on Twitter (highly encouraged).