Memorable Moments: The Not So Mighty Ducks

The Penguins returned home to face the Anaheim Ducks on Monday night. It was a scoreless game through 2 periods, yet highly entertaining hockey. Things opened up in the third period, with the Pens winning by a score of 3-1.

Share All sharing options for: Memorable Moments: The Not So Mighty Ducks

The Penguins, having lost 4 out of the last 5 games, mixed things up a little bit with their lines, hoping for it to spark the offense. They scored 3 goals. Was that a result of the line changes? ::Shrug:: a win is a win as far as I am concerned.

'You Tried' Moment: Brooks Orpik tried to step up on Devante Smith-Pelley.

Bad First Period Moment: The Penguins did not record any shots on goal through the first 18 minutes of the game. Praise Beau Bennett. Only 3 shots total through the first period. They were lucky to get out of the first frame without trailing. High praise to Fleury from me getting through the period and giving the Pens a chance. Could have been ugly. 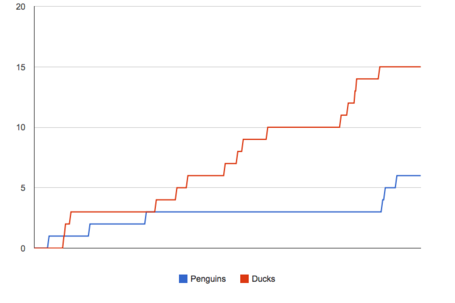 Farewell Moment: Teemu Selanne played his (likely) farewell game in Pittsburgh. The Penguins played a tribute video for him during the 1st period. UPDATE: this was the only time Teemu would be seen tonight.

Using Your Head Moment: Viktor Fasth took a shot right off the mask.

Missed Opportunity Moment: Luca Sbisa had a breakaway in the 2nd, upon exiting the penalty box. He missed the net.

No penalty was called, actually.

Whiffed Moment: Sidney Crosby drew Fasth away from the net and set Jussi Jokinen up perfectly for a goal.

He fanned on it (it would not hurt the Pens in the grand scheme of the game, seeing what followed this moment).

Malkin circled the wagons and set Brian Gibbons up for his first NHL goal.

Brandon Sutter tipped in an Olli Maatta shot for a goal.

Ryan Getzlaf scored for the Ducks.

Crosby put a shot on net using Chris Kunitz as a screen and beat Fasth to make it 3-1.

Good game from the Pens, especially the 2nd and 3rd periods. Fleury was really good. Ducks are a great team, so its good to see the Pens rebound from their woes and do so against a quality opponent.

The Penguins will travel to D.C. to take on the hot Washington Capitals on Wednesday night at 8:00 pm on NBCSN. It will be the Pens fourth 'Rivalry Night' in a row (Bruins, Rangers, and Flyers). Rivals on NBCSN tomorrow at 11 pm.

Memorable Moments' is a mini-recap posted after each game, featuring GIFs and some breakdowns of plays. You can follow/chirp Mike on Twitter @MikeDarnay.