The Penguins went into our nation's capital on Wednesday night for their 4th installment of NBCSN's 'Rivalry Night' in a row. The Penguins took a 2-0 lead after the first period and allowed that lead to control the pace the rest of the way and shut out the Caps by a score of 4-0.

Having won their last six games at Verizon Center, the Washington Capitals would not continue that home winning streak to 7 games. The Penguins scored early and were able to contain the potent and tenacious power play of the Capitals and were able to get 2 points towards the standings. It was a good road win for the Penguins against a hot Caps team who had been very good at home as of late.

Scary Moment: the Capitals power play in general. As a Penguins fan, it is reminiscent to how potent and scary it was during the 2009 Eastern Conference Semifinals. Winning face-offs and setting up Alex Ovechkin outside the left circle for a one timer. Terrifying.

A Lucky Moment During the Scary Moment: One of Ovechkin's signature one timers from the left circle like i just mentioned rang off the post.

He was not happy about this. (Earmuffs for the children out there.)

'Slumping' Moment: Despite having not scored a goal in 14 games, Evgeni Malkin made a smart and beautiful play to set up the 2nd goal of the game. It was Beau Bennett's first of the year.

Malkin looked over the play ahead of him, decided to pull the puck away from the offensive zone. That play drew the defenders towards him and allowed Bennett to drive towards the net with minimal defensive pressure and beat Braden Holtby far side.

Underrated Moment: As we have pointed out before, Olli Maatta often shows he is going to make one play, and then makes a different play. Like a quarterback in football with a pump fake. Ian Altenbaugh has referenced this before, mentioning that it is something the Penguins teach in development camp, as a method to keep young players from getting into a bad habit of telegraphing their plays and passes. While discussing with Ian, he had mentioned that Derrick Pouliot referred to them as 'deception plays.'

Here, Maatta showed that he was going to shoot the puck back into the zone up the middle on a one timer that he called for, and at the last second, turned and put the puck along the boards. This just shows how smart of a hockey player Maatta is, and the hockey IQ he brings to the table.

Tempo Moments: After a slow first period, things really opened up in the second. The game pace changed and really took off. Chances were being traded, odd man rushes, 2-on-2's, really fun and entertaining hockey that reminds you of the pace of a playoff game.

Surprising Moment that Shouldn't Be Surprising: Sidney Crosby is good at hockey.

When the puck was on his stick, i thought "no way." I guess I should remember that with Crosby there is always a way. Getting this goal to make it 3-0 to start the third period was deflating for the Capitals.

Our own Jimmy Rixner was in the house at Verizon Center tonight. Great pic. 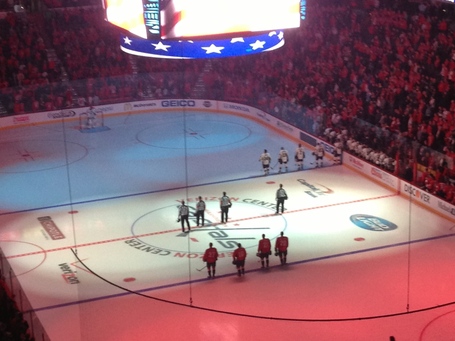 And great video of Pens fans on the steps celebrating.

Paul Martin made it 1-0 in the first on a goal that Holtby never really saw.

Craig Adams took a penalty early in the game almost 200 feet from his own net. I would say he got lucky with the Capitals not scoring on the ensuing power play.

The Caps were without Jack Hillen, Mike Green, and John Erskine on defense. Sometimes as an opponent, you avoid the hot handed goalie, or catch a team at a rough time.

James Neal scored on a nasty wrist shot to make it 4-0.

The pairing of Brooks Orpik and Paul Martin tonight was tremendous. They spent a majority of the game matched up against the potent Ovechkin line. They played smart hockey, limiting odd man rushes and turnovers and forcing the Capitals to try and dump it in behind them and were able to shut things down. I am looking forward to seeing the Shift Chart and how Bylsma was able to get the road matchups.

Not enough credit being given to Jacques Martin and the effect he is having on the defense. That effect can be seen especially in games like this, when the Pens take an early lead and want to limit opponent chances and throw a wrinkle of a trap at them, while still attempting to put some more points on the scoreboard.

Tonight was a full team effort, that was put forth for a full 60 minutes. They have shown their own issues in that area, closing out games or keeping their foot on the pedal, but that was not even remotely a problem tonight. It was a great win against a very good Capitals team.

Any time the Penguins can record 40 shots on goal in a game, it will most always give them a very good chance of putting together a win.

Underrated shutout performance by Marc-Andre Fleury. He helped withstand the initial surge and pressure from the Capitals and helped set the tone and weather the storm to give the Penguins a chance to take the lead later in the first period.

It obviously will be a long time still, and many games to be played before it would even be penciled in, but a playoff series between the Penguins and Capitals would be highly entertaining. With the new playoff format, it would not be unreasonable to imagine these teams playing in the first or second round of the playoffs.

The Penguins will head home to Pittsburgh to face the New York Islanders on Friday night at Consol Energy Center. They then will head North of the border to Montreal to face the Canadiens on Saturday night.

Memorable Moments is a mini-recap after each game featuring GIFs and breakdowns of some plays. You can follow Mike on Twitter @MikeDarnay