Slice the numbers any way you want and the picture is clear- the Pittsburgh Penguins out-classed the Washington Capitals in a manner not usually seen among two competitive NHL teams.

The Pittsburgh Penguins came out the gates roaring and pretty much blew the doors off the Washington Capitals last night. It’s bound to happen- one team shows up, plays strong, gains confidence and it snowballs from there. However, at the NHL level, especially in a matchup of rivals used to playing close, back-and-forth games, it was definitely surprising to see the game keep getting so lopsided. Let’s take a look at the fancy stats to paint the picture of just how complete the domination by the Pens was.

As we mentioned a few days ago, the Brooks Orpik and Paul Martin pair going head-to-head with the Capitals top line (Marcus Johansson – Nick Backstrom – Alex Ovechkin). The Pens pair were up to the task, obviously keeping the dangerous line off the board- but also limiting Ovechkin to just 2 shots on goal- his lowest total of the season. And they did it the hard way- Martin blocked six shots and had a hit, Orpik was the yin to the yang with one blocked shot and seven hits. Martin appeared to be stung by an Ovechkin shot late in the first period, but was able to answer the bell and keep playing. Credit Dan Bylsma for getting the matchup almost 100% (see the chart below)- whenever #8 in red was going over the boards, so too were 7 and 44 in white.

One adjustment I noticed, Martin was shading over to Ovechkin’s favorite spot (in space, towards the left faceoff circle) while the Pens were short-handed. Martin and Orpik would consciously shift positions on the fly to make sure they had Martin minding AO, and Orpik chasing (and often hitting) the puck carrier away from the net.

While the game was within two goals, at 5v5 the Penguins out-attempted the Caps 13-0 and out-shot them 11-0. That’s an almost unheard of domination. Washington did get a shot on goal from defenseman Nate Schmidt during a 6 on 5 situation (the Caps pulled Braden Holtby for an extra attacker due to an impending penalty) but that would be all.

In fact, if the refs don’t call Craig Adams 3:56 into the game on a marginal offensive zone tripping call that didn’t change possession nor create/deny a scoring chance, Pittsburgh probably makes this a lot uglier a lot quicker. But, that initial penalty kill also probably fueled the Pens confidence and threw the Caps off their game as well. All compounding factors meshed together in a perfect storm last night.

That's so good it's literally unheard of, so I'll repeat it. While the score was 0-0, 1-0 or 2-0, the Washington Capitals couldn't even get a shot on net at 5v5 against the Penguins. Unbelievably impressive.

I’m still waiting on the excellent extra skater to update their records, but with even strength shots 33-9, the Penguins had some players with huge puck possession and shots for vs. shots against number. James Neal and Evgeni Malkin, in particular, didn’t see a lot of the Caps best defensive pair (Karl Alzner and John Carlson) and were able to rack up some absurd shots for while they were on the ice, basically taking total ownership of the puck. 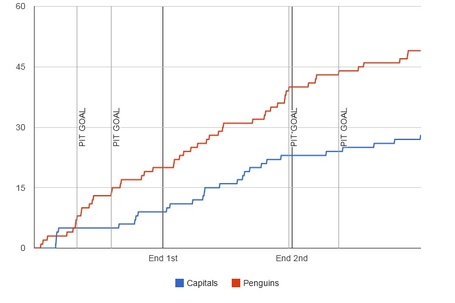 The Pens really ran away with things after Martin scored to make it 1-0. The Capitals basically flat-lined after Sidney Crosby’s beauty of a power play goal late in the second, any hope of a comeback they had seemed to be snuffed out by that point. Washington had 3 powerplays in the first period and failed to get any goals or even carry momentum out of them and the Pens got their feet under them and were off running.