Chris Kunitz is scoring goals from the dirty areas

Getting to the front of the net is paying off for Chris Kunitz and the Pittsburgh Penguins. The forward has 8 goals on the season, and as this chart illustrates, the key to his success is coming from point blank range.

Share All sharing options for: Chris Kunitz is scoring goals from the dirty areas

“Want to score goals in the NHL? Better get to the front of the net.” It’s a hockey saying as old as the coaching profession itself, but seeing this mantra illustrated helps to drive the message home.

From our own Mike Darnay, who’s tracking and plotting Pittsburgh Penguins goals all season, look at Chris Kunitz’s goal chart: 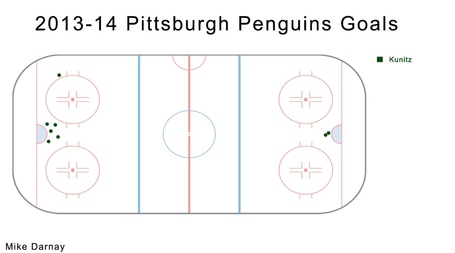 The only outlier near the right wall actually got directed from right in front into the net, as well, albeit by a Columbus Blue Jacket player. So it just goes to show: getting to in front of the net is the key to scoring goals for most players in the NHL, and with a goal in each of his last 4 games (and 7 in the last 10), no one is proving that better than Chris Kunitz right now.

Of course, getting to the net is only one part of the equation. Then a player has to have the hands, skill, toughness and determination to absorb hacks and whacks and be able to deflect incoming pucks, find rebounds quicker than the other team and even probably some luck to swat at bouncing pucks to have them get over the goal-line. Coach Dan Bylsma gave Kunitz yesterday off from practice with “bumps and bruises”, a natural occurrence for a player that has to battle in the gritty areas along the walls and in front of the net.

Chris Kunitz’s eight goals on the season tie him for first on the team with Crosby, and is good for a share of 8th place league wide. This production has been made even more important for the team since James Neal and Beau Bennett are on the shelf with injuries and a weakened second line has struggled to consistently produce points.

This hot-streak of production is nothing new- Kunitz scored 22 goals and added 30 assists in the lockout shortened 2013 season and also potted 26 and 23 goals in the prior two seasons. Sure, it helps to play on a lin with Crosby and forechecking dynamo Pascal Dupuis, but Crosby can only get the puck from Point A to Point B. A setup without a finish isn’t going to go in the stats, and Kunitz has had his fair share of conversions. Of Kunitz’s 8 goals on the season, Crosby has picked up the assist in 5 of them.

And mostly, he’s getting them from getting to the front of the net and paying the price to score goals.