The Pittsburgh Penguins will be wearing these jerseys on March 1, 2014...So what do we think?

The Pittsburgh Penguins and NHL unveiled their newest jersey, which they'll use for one game against the Chicago Blackhawks on March 1, 2014. A game which recently went on sale and sold out in under 24 hours, by the way.

Well, I mean I guess they're better than the LA Kings super silver jerseys, or the Anaheim Ducks hunter orange ones, or even spray-painted looking New York Islanders edition for this outdoor game. 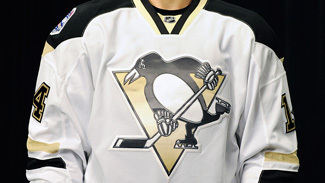 What's the consensus on these? I'm thinking they could have done a lot worse, compared to the other teams above, but they still kind of look weird, like knockoffs of the road jersey gone wrong.

As far as a more permanent new jersey, there have been whispers for some time that the Penguins may be looking to bring in a new third jersey sometime soon, since they ditched the "cursed" blue jersey above. Next season 2014-15, represents the 30th anniversary (!!) of Mario Lemieux's rookie season, perhaps the team will go with some throwback to those days. We'll definitely keep you updated when any news breaks on that, but for now the Pens know what the next jersey they'll wear is.