The Penguins traveled to New York to take on the Rangers at Madison Square Garden on Wednesday night.

Another Wednesday night in New York for the Rangers and the Penguins, and another Rivalry Night on NBC Sports Network.

The Penguins rolled into Madison Square Garden with their depleted lineup, and took the Rangers to shootout, where they got the extra point to get out of New York with 2 points.

Chris Kunitz was called for goalie interference in the OT, when Henrik Lundqvist was so far outside of his net that he was basically in Brooklyn.

Post Moment: Early in the game, Derek Stepan and Rick Nash led a rush with a give-and-go and split Olli Maatta.

Robbery Moment: Mid-way through the first period, Sidney Crosby fed Pascal Dupuis, who found an open Chris Kunitz in the slot. He appeared to have an open net to shoot on.

MASH Moment: At one point, NBCSN flashed a graphic that showed all the current injuries to the Penguins. 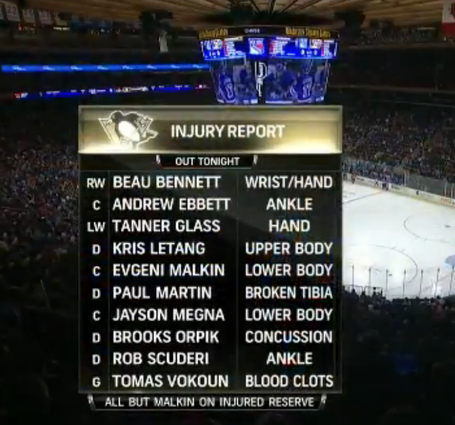 Stunning. Nothing else to say.

Drawn Penalty Moment: Chris Conner kept his wheels spinning and did a great job of drawing a penalty.

If he would've scored on this shot, I wouldn't have anything else to GIF for the rest of my life.

For me, every period the Pens (mostly the young defense) play without giving up a goal is a little bit of a win in its own right.

Bad turnovers for the Pens at MSG seem to be a common occurrence.

Harry Zolnierczyk took a penalty by going to the net and spraying Lundqvist. It also got Michael Del Zotto off the ice. That's a great trade-off.

The Penguins will return to Pittsburgh to play the second leg of a back-to-back, tomorrow night, hosting the Minnesota Wild.