A look at some of our favorite moments from Tyler Kennedy, a player who spent 6 years on the Penguins before being traded this summer to San Jose.

Share All sharing options for: Tyler Kennedy returns to Pittsburgh

Tomorrow night marks a game in Consol featuring the San Jose Sharks, who have a 19-3-5 record (good for first in the Pacific division) and are currently riding a six game winning streak. While what should be a fun matchup of two of the stronger teams in the league, it also has the storyline of being the return to Pittsburgh for the first time in a visitor’s jersey by Tyler Kennedy. Kennedy played 372 regular season games (and 76 more playoff games) over six seasons with the Pens, forming a memorable third line for a time with Matt Cooke and Jordan Staal that helped power the Penguins to two Stanley Cup finals and of course the championship itself in 2009.

As such a valued member of the team, it’s only fair to put the nostalgia on for the old boy and remember some of the better moments he had as a Pittsburgh Penguin.

It’s gotta be tough for two plus hours when anything you do might be captured on camera, but poor TK got caught, um, licking his stick for some reason when the camera was watching Tom Fitzgerald give some instruction to Craig Adams on the Penguins bench.

The Puck Daddy, Greg Wyshynski, tracked down TK and was able to ask just why in the world this happened:

Kennedy instead said he salivated on his equipment because he thought "maybe it'll bring me a little luck."

Perhaps it did. The lick came prior to his two-goal game in Florida, and Kennedy said he didn't repeat the feat against the Capitals -- going scoreless with two penalty minutes and getting checked through the Plexiglas by Milan Jurcina.

"I might have to start licking my stick all the time now," he said. 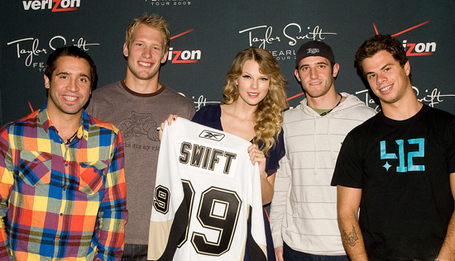 I’m not saying there’s a curse or anything that all four players have left the Penguins over the course of the past four years- pro hockey is a game of high roster turnover after all. But it was interesting that, before TK, the other three players have the Pens into obscurity and/or bottom dwelling teams. Jordan gets to play with brother Eric in the relative anonymity of Carolina, where they’ll be a middling, non-threatening team for years to come. Max Talbot signed with the Flyers- didn’t really make a huge impact for them and was traded when they sunk to the basement, as Philly is want to do. And poor Alex Goligoski is destined in franchise lore be the answer of a trivia question (“who did the Pens trade for James Neal”), kind of like a reverse Alek Stojanov.

In that regard, maybe Kennedy has escaped that fate, since his Sharks are one of the top teams in the league right now, and usually very strong, even if they haven’t had the best of luck or results come playoff time.

Hey, something cool and unique for a goal celebration. Anything to add a little flavor and flare into a usually uniform goal announcement is cool in my books.

Kennedy and Letang do the weather on KDKA (June 2009)

In the delirium of winning the Stanley Cup, TK and Kris Letang did the weather for some unknown reason on KDKA one morning. Why? Why not.

This goal basically salted away Game 4 for the Penguins, allowing them to even the series at 2 games to 2 with the Red Wings, “breaking the script” of the 2008 Stanley Cup final for the first time, since the previous three games in ’09 played out more or less the same as the year before. This goal, in the second period, would be the last goal of the game, and capped Pittsburgh scoring three goals in a 5:27 span. It was arguably the prettiest goal of the series, and Kennedy buried the beautiful pass from Chris Kunitz.

With the Pens up 1-0 in Game 6 (backs to the wall down 3 games to 2), Kennedy combined with Max Talbot to score the eventual game-winner to extend the game to the climatic Game 7 where Talbot took over as hero, scoring the Pens two goals to win the Cup. However, TK helped send the Pens to that game 7 when he took a pass from Talbot behind the net, stepped out quickly and beat Chris Osgood on a lot more simple a play than the Game 4 goal. Still, it counted just the same.

Looking back on it, watching Talbot and Kennedy out-fox no less than Nicklas Lidstrom on that goal kind of tipped fate’s hand that it was going to be the Penguins year, didn’t it?

So there you have it, six of our favorite Tyler Kennedy moments, a player who was easy to laugh with (and at) in his six years in Pittsburgh, but also had some super key moments in the Pens’ Cup runs and should definitely be remembered as a key and valued contributor to those teams. Here’s to ya, TK.