Memorable Moments: Back in the Win Column

The Penguins returned home to Pittsburgh to host the Columbus Blue Jackets and defeated them by a score of 2-1.

Share All sharing options for: Memorable Moments: Back in the Win Column

Coming off a deflating late 3rd period collapse vs. the Boston Bruins on Saturday, the Penguins were able to get back in the win column on Monday night, with a solid performance by Marc-Andre Fleury.

Close Call Moment: It's not too often Sidney Crosby does not score when he has a clean shot at close range.

Curtis McElhinney was able to get a piece on the shot to keep it out.

Mustache Moment: Simon Despres must think it is still Movember. 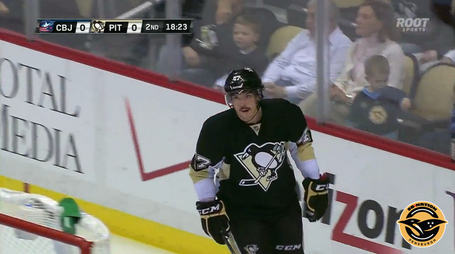 Either that or he is still riding high with a good luck mustache after his call up from Wilkes-Barre and his good play.

Malkin Moment: Having missed 2 games with an undisclosed lower-body injury, Evgeni Malkin appears to be okay.

Jack Johnson and Fedor Tyutin are still wondering what happened to them.

Troll Moment: Simon Despres is a troll. He loves to smile at an opponent while they're being taken off for a penalty or after a scrum. 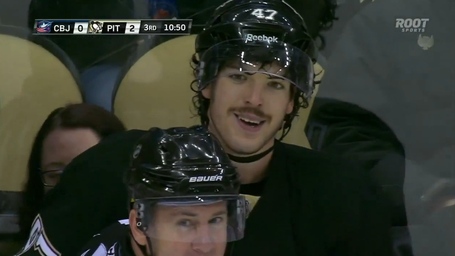 Ryan Murray is a great defenseman and is going to be for years to come.

Jayson Megna just looks so comfortable playing on Malkin's wing. If he can keep up, the puck and chances will come to him.

Second goal of the game was credited to Crosby. it was a shot put on net by Olli Maatta that bounced around and trickled in. It's good to be lucky sometimes.

The Pens have the next three nights off, before they host the New Jersey Devils on Friday night, then head to Detroit to face the Red Wings on Saturday night.