Fleury and Anderson to start in goal

Share All sharing options for: Fleury and Anderson to start in goal

From all over the internet, it'll be a battle of the top goaltenders for each team tonight, with Marc-Andre Fleury leading the Penguins and facing him down will be Craig Anderson.

Anderson has been the league's best goalie so far this season, allowing an unrealistic 15 goals in 11 games. Look at the league leaders for goaltending. 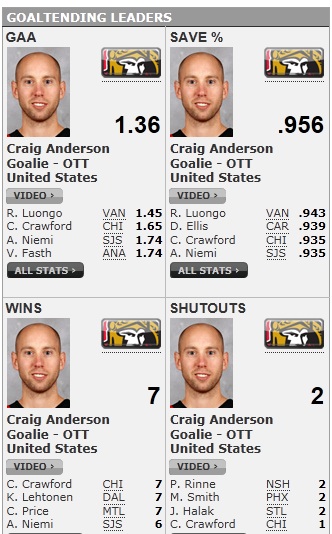 GAA, save percentage, wins, shutouts, take your pick and it's all Anderson's goofy face.

Anderson played last night and stopped all 42 shots he saw against Buffalo. That gave me a false hope maybe he'd get the night off, but clearly I was wrong there.

The Penguins saw Anderson on January 27th, and, true to form, he was very good on that day stopping 33 of 34 shots in regulation and over-time. Then the shootout happened, and as the Iron Sheik might say, Pittsburgh humbled Anderson the "old country way" when James Neal, Sidney Crosby and Evgeni Malkin all scored shootout goals to the give Pens the win and extra point in the standings.

Fleury, for his part, has been good of late too, winning three of his last four games and allowing two goals a game in the stretch. Not Anderson numbers, so one has to figure the Penguins are only going to score 1 or 2 goals tonight you have to figure they are probably in trouble when the clock hits 0:00.