I love it when a good plan comes together

Dan Byslma raised eyebrows when he decided to pair defensive defensemen Brooks Orpik and Paul Martin together. Today's game against the Devils showed Bylsma's vision in action, it frees Kris Letang to make a huge difference for the Pens.

Share All sharing options for: I love it when a good plan comes together

When Dan Bylsma announced shortly after the lockout that he wanted to pair defensive defensemen Brooks Orpik and Paul Martin together, a lot of people were surprised. It seemed to be a tough proposition for success and left no obvious partner for Kris Letang, the guy who should be the cornerstone of the unit given his all-around ability.

Our buddy John Fischer at In Lou We Trust, has some great work on tracking stats and provided the following for Corsi Ratings for the game. Click here if you need a definition of Corsi, which in a nutshell is an even-strength rating that any shot attempt for your team while you're on the ice is a positive, and any shot attempt at your net while you're on the ice is a negative. It's not a complete measure, but it captures a lot of which end the puck tends to be at while a player is out there. Good players will tend to get a higher Corsi, since they will be able to get the puck into the offensive zone and then create shots. 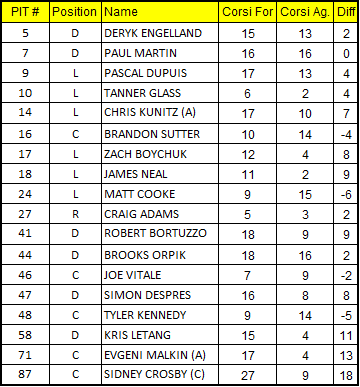 The Penguins ran away with the overall Corsi 49-33, a measure of the strong game they had in terms of possession, faceoff wins (62%) and just the general control that was exhibited. The numbers above for Sidney Crosby and Evgeni Malkin are very impressive, and the team up and down the board is impressive. As anyone who watched the game knows, Pittsburgh had the puck more than New Jersey and that's reflected above as you'd expect.

What pops out is Dan Bylsma's defensive strategy at work. Martin and Orpik ate the toughest minutes on the team, they were matched against Ilya Kovalchuk as much as possible. Kovalchuk got his five shot attempts for the game, but the Pens total team defense did well to keep them all to relatively harmless efforts and Kovalchuk was a non-factor for the course of the game.

With Letang not having to deal with the top threat, he was free to tilt the ice in the Pens direction. Letang skated 17:52 at even-strength, and the Devils were only able to attempt just 4 shots, compared to the 15 for Pittsburgh (including two goals).

This goes further than just "good player has a good game in a blowout win" though. It's about Bylsma's vision. The game's finish ended up a best case scenario, but remember it was a 2-1 game after two periods. While the result was in doubt for a while, Orpik/Martin were able to do their jobs to cancel out NJD's top line, and Letang did his part to tilt the ice almost completely in Pittsburgh's favor.

It won't always be so clean and easy to see, but for one game at least Bylsma's idea to create a "shutdown pair" not including Kris Letang looks pretty genius, especially considering it was Letang's goal early in the third that made the game 3-1 and really led to the team opening up the floodgates on the scoreboard.