In which we reveal a boneheaded mistake by the resident nerd.

The problem with making nice-looking charts is that sometimes you're looking at style over substance. That's not what happened with these; the data is still meaningful and fun to look at. The problem is that I was kind of comparing apples to oranges. As I've mentioned before, the size of the bubble is based on the player's Corsi rating relative to his teammates, and the y-axis number was based on the quality of competition. For some reason I got it into my head that using the QoC number based on relative +/- was correct, when it turns out that's actually not conventional—QoC based on Corsi is. This shouldn't come as a surprise considering that the rest of the chart is Corsi-based.

I'd like to stress that I feel this what I did was not exactly wrong, but unconventional and perhaps somewhat less useful than the typical chart that Rob Vollman came up with. So, with this edition, I'm switching to Corsi for everything, the way Vollman intended. That means the bubbles might move more than usual, but in return for the confusion, the data should be somewhat more meaningful. The bubbles will have a different vertical position than they would have with the old data, but that is all that would be different. Anyway, let's get on with it. 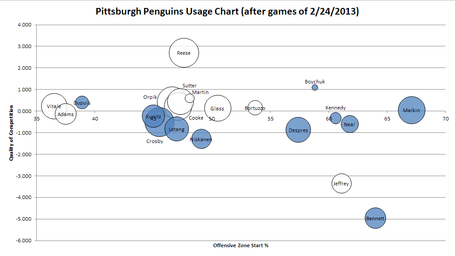