Jordan Staal escaped the shadow, but he can't escape the role

A look at advanced stats and data shows that Jordan Staal's 2013 season with Carolina has been very similiar to how he was used as a Pittsburgh Penguin.

Share All sharing options for: Jordan Staal escaped the shadow, but he can't escape the role

Last summer Jordan Staal found himself at a professional crossroads. Drafted by Pittsburgh #2 overall in 2006, he’d been a mainstay in the Penguins lineup ever since the age of 18. The team gave him a chance to stick in their NHL lineup, and he did, never looking back to claim a roster spot and eventually work himself into being an invaluable member of one of the league’s best teams and a Stanley Cup champion in 2009.

Staal’s contract with the Penguins was set to expire after the 2012-13 season, and in the summer of 2012 Pittsburgh was very interested in talking extension. The negotiations culminated with a ten year, $60 million dollar contract offer which Staal mulled over, then declined. Staal’s agent said his client was “not prepared to enter into a contract extension at this time”. This signaled to Pens general manager Ray Shero, that if Staal wouldn’t be swayed by such an offer, Shero had a player that would probably walk as a free agent to a team of his own choosing.

So Shero moved Staal to Carolina on draft day last June, getting a handsome return (Brandon Sutter, prospect Brian Dumoulin and the #8 pick, used on defenseman Derrick Pouliot) for Staal.

In the heels of the trade, the biggest narratives were about Jordan Staal being united with his brother Eric Staal, the captain of the Hurricanes. The second biggest, oft-repeated story-line was about Jordan getting the chance to play in a different role in Carolina than in Pittsburgh, where he would always be third on the center depth chart behind former league MVP and scoring champions Sidney Crosby and Evgeni Malkin. Jordan, it was said, would now get to play a more offensive role in a scoring line capacity. Carolina and J. Staal also agreed before the lockout to the exact same extension (ten years, $60 million) that Pittsburgh had put on the table just weeks earlier.

Granted it is only 20 games into his Carolina Hurricane career, so there’s a lot of time left, but let’s look at how Staal’s performance so far this season compared to recent years.

This year’s bubble is in the middle and sort of looks like 2009-10, though his Corsi rating (which controls the size/color of bubble) was much, much better a few years ago.

In fact, what stands out is the zone starts- Jordan Staal is starting 49.7% of his shifts so far this year in the offensive zone. Compare that to 47.8%, 48.5% and 50.8% the past three seasons in Pittsburgh and he's still right in the middle of where had been starting shifts in his Penguin days.

Though his quality of competition number is eased from the astronomical number it was last season, it’s still higher this year than in three of the five years as a Penguin. Jordan Staal is still seeing some pretty tough competition out there, and often starting shifts not in the offensive zone. Sounds a lot like his time in Pittsburgh.

Looking at total ice-time, there isn’t much of a difference either: 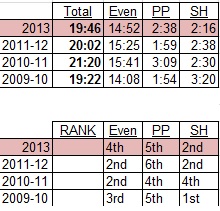 (Rank indicates spot among forwards on the team)

As you can see, it’s more or less about the same- with the outlier being power play time in 2010-11 going way up, being as Crosby/Malkin were both out for much of the spring of 2011. Other than than, Staal’s assignments are virtually identical this year to what they’ve been over the past few seasons in Pittsburgh.

This seems like an edge- Staal has been playing all year as the second line center in Carolina. He’s played with a rotation of wingers like Jeff Skinner, Zac Dalpe and is currently with Jussi Jokinen and Pat Dwyer.

Compare that to his Pittsburgh days when Staal played a lot with Matt Cooke and Tyler Kennedy on the third line, dating back to the Cup win in 2009. But Staal did get minutes (due to injury) to play with the likes of Pascal Dupuis and Chris Kunitz.

Skinner is the standout of all the names mentioned for his skill, but given the point totals that Dupuis and Kunitz have had recently, there are definitely worse wingers out there to have, and even Cooke+Kennedy of a few years ago (when TK put up 20 goals) are enough to declare things basically a push so far.

Jordan Staal isn't playing with all-stars, he isn't playing top-line minutes with his brother Eric or Alex Semin or anything like that. Sounds a lot like his days in Pittsburgh, really.

This isn’t about being wrong or right- Jordan Staal forced the hand to see what was out there away from Pittsburgh. When it's time to move on, it's time to move on. In Raleigh he can pal it up with his brother and enjoy a nice city that has some good fans but isn’t as hockey-centric or pressure filled as many markets out there.

At the end though, the data shows pretty clearly that in 2013 Jordan Staal is getting used very similiarly to how he was when he was a Penguin, getting a lot of minutes and many of them not in prime offensive opportunities in terms of tough zone starts and quality of competition. That isn't bad, or good, but it does go to refute the common narrative that Jordan Staal would get a drastically different offensive role in Carolina that he could not get in Pittsburgh, due to being behind Crosby and Malkin.

Staal is a great two-way center, and is not going to escape the role of picking up tougher minutes (in terms of zone starts and PK time) than a true #1 offensive center (like his brother) who would benefit from playing easier time. Jordan Staal may have escaped the shadow of being 3rd on the depth chart, but he's not going to escape his role as an NHL player any time soon.