How has Bylsma used his players, and why should we be surprised?

We know about usage charts here [warning: PDF link]. We've discussed last year's usage at great length and what it meant for the team going forward without Jordan Staal to lean on. Just to recap for those who are unfamiliar with the concept, though:

So, without further ado, let's take a look at the current chart after last night's Islanders game. 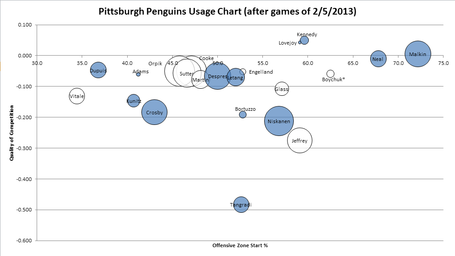 So let's bullet point the hell out of this, while noting that everything changes very quickly with so few games played so far in the season. Some of these players moved pretty drastically between the end of the Capitals game on Sunday and the end of the Islanders game last night.

All that said, it's early. It's early. It's early. Have I said that enough times for it to stick? Some of the bubbles moved quite a bit, changed color and size from one game to the next already. I expect this to continue for a while until the lines and lineup are more stable.