With a combined 12 points on the night, the Pens' first line paced the Pens to victory.

Share All sharing options for: The First Line Is Unstoppable. Pens win 6-1.

The Pittsburgh Penguins needed a game like this as badly as they needed the most recent game against the Philadelphia Flyers on Thursday. The New York Islanders, also fresh off a back to back, came to Pittsburgh and couldn't have played a more disinterested hockey game. When you give the Pens the opportunity to dominate, they seldom don't.

Tomas Vokoun started in net, hoping to build on his game after Marc-Andre Fleury was pulled against the Flyers. While the Islanders didn't give him too much work, he was obviously able to get it done. The only negative comment I can make was the Isles goal, not because it was a goal, but because what it continues to prove about Vokoun. I can't take away from how well Brad Boyes picked his spot, but Vokoun had no excuse to not make that save. That goal was ultimately scored because Vokoun saw the puck only four times in the first period. Other than rebounds, my biggest beef with Vokoun is how much his game depends on him seeing consistent shots. The third period started with an Islanders power play and when the Pens killed it, Vokoun, unsurprisingly, had his groove back. Being challenged early on in the period was just what he needed. However, depending on that isn't good.

But enough about negatives, how about Chris Kunitz who's making a strong run for the Rocket Richard trophy? It's one thing seeing Kunitz putting up the goals during games, but seeing this? 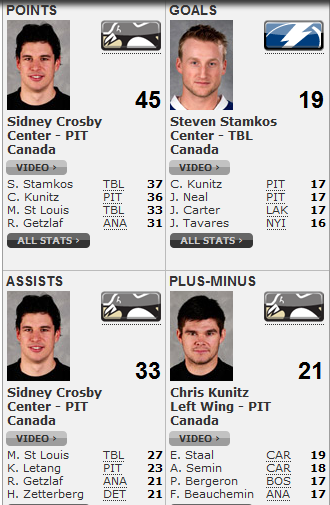 I probably don't stand alone when I say I'm speechless.

For years, Pens fans have grown accustomed to the "We have to find a winger for Sidney Crosby" complaint to the point where it became second nature in our laundry list of needs. I say hold on the searches because there is no way I want to break the up the perfection that has embedded itself in the first line.

Players like Kunitz are a dream to Bylsma's system (hence why he was acquired not long after Bylsma took over head coaching duties). He's a physical player who has the hands to finish because he drives to the net every shift. His second and third goals of the game are the perfect examples. With a player like Crosby on your line, it's going to be hard not to finish your chances because he will make sure you get the puck. The confidence this builds in a player shines forth when you take the ice which is why Kunitz looks dangerous every time the puck is on his stick. Defensemen now have another threat on their hands and Crosby is enough to handle as it is.

This has to be the closest to pre-concussion form we've seen yet. He's amidst an eight-game point streak that has seen him put up 20 points. A quarter of them came this evening. I smiled when I saw that number because a part of me wants to say how that's an astronomical number uncommon for these times, but it's becoming the Crosby standard. He's a player who sets the bar high and totally shatters expectations only to continue that upward climb to greatness. As much as people love to hate him, the amount of effort he puts in to ensuring he's the best in the world is to be respected (and it is, just in different ways).

The Pens were on a 5-on-3 in the first period and Bylsma put Beau Bennett out there for the obvious reasons. Crosby was anything but subtle in his attempt to get Bennett the puck to get him another goal under his belt. That's just the player Crosby is and he still gets rewarded with points by the handful.

But Crosby and Kunitz aren't the only ones teams need to watch. Pascal Dupuis, who went on a seven-game pointless streak, is starting to make his mark once again. His first goal of the game looked like it was off the stick of James Neal or Evgeni Malkin, a sneaky shot from the goal line that had so much power, the puck managed to fight its way across the line. And his last, like Kunitz's goals, simply driving to the net when Crosby has the puck was all that needed to happen. We all remember the season Dupuis had last year and he shouldn't be prepared to slow down because of what we're seeing in Kunitz (which can be argued is similar to Dupuis' stretch last season).

Not to be lost in the mix is Neal's quiet three-point night. We're so used to seeing Neal's success come in tandem with Malkin's since they play like a two-for-one deal, but it's good seeing him connect on the power play with Kunitz. And you can't forget his breakaway goal. We can probably thank Saturday's shootout for that.

And no power play goals against. A beautiful thing to see, but I doubt we've seen the end of the penalty kill woes.

The first line is taking numbers right and it couldn't be at a better time now that Malkin has been ruled out for 1-2 weeks, according to Bylsma's post-game comments. The biggest issue on the Pens' plate right now has to be consistent defense and goaltending which, as we all know, must be solved before the playoffs fall upon us in less than two months. Shero has a lot of cap space to fill and it doesn't look like a winger for Crosby is at the top of the wish list.

No, Kunitz is filling that role better than anyone else right now.

Boston is up next for the Pens on Tuesday. Big test for this club who will be facing a team with only three regulation losses (least in the East) and they will definitely not give half an effort like the Islanders did.