Evgeni Malkin's next contract might be coming into focus

With Corey Perry and Ryan Getzlaf re-signing in Anaheim, a bar has been set in the new CBA for star players. The Pens will be talking contract with Evgeni Malkin after this season, and with Sidney Crosby's contract in mind, a look at what a fair deal may be for both sides.

With a new collective bargaining agreement and a couple of prime “unrestricted free agents to be” this coming summer like Ryan Getzlaf, Corey Perry, Jarome Iginla and Alex Semin, it was just a matter of time before some team re-signed a star player and set the market for the whole league. With contract cap limits of eight years, and more restrictive accounting in how teams can manipulate average salary cap deals (goodbye Kovalchuk/Hossa type contracts) there would have to be movement to set the bar.

The Anaheim Ducks have definitely done just that in the past couple of weeks. First they signed Getzlaf, their 27 year old captain to an eight year contract that will pay him $8.25 million in each year. Now they’ve just re-upped former league MVP Perry at eight years and $8.625 million per.

Huge contracts, but you also get the feeling antennae around the league and agent’s offices went up.

Evgeni Malkin has one more year on his current contract, the Pens are allowed to talk to him now, but they may not sign or announce any extension until July. Last summer Sidney Crosby signed a $104.4 million, 12 year contract before the end of the lockout (with an average cap hit of $8.7 million). Below are the details from capgeek.com: 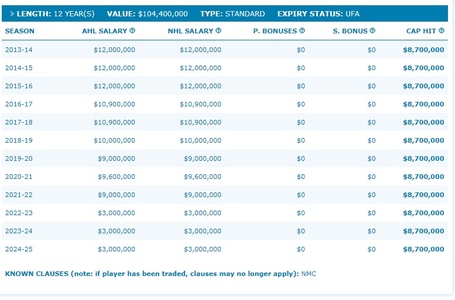 It is a front-loaded contract, but not to the extremes of some in the past, and Crosby will be 37 when it ends and can reasonably be expected to finish his contract on the ice, should his health allow.

What’s interesting though are those first nine years. Crosby will receive $95.4 million in that period, an average of $10.6 million per season in his prime earning years when he’ll be in his late 20s/early 30s.

Given where Getzlaf ($8.2m) and Perry ($8.625) came in, a cap figure of around $10.6 million (for the max allowable of eight years) for Malkin seems fair for him and fair for the team too. Malkin would be leaving a little under the maximum deal under the table- $12.86 million is 20% of next year’s salary cap and the highest one player can make- but $10.6 million would be the league’s highest salary cap hit and give Malkin some prestige there.

Crosby realizes and is OK with the fact that Malkin’s cap hit will be higher than his. It’s just business. Crosby is going to make $12 million the next three seasons, a figure that Malkin may approach but won’t likely exceed.

At the end of the day, the choice is Malkin’s. When you have a superstar in his prime, he calls the shots on the contract. He did last time when he signed the identical second contract as Crosby did ($8.7 million for five years) and he will hold the cards this time too. Given that Malkin can’t sign the same contract that Crosby can under the new CBA, Malkin definitely deserves to have a higher cap hit, to get his fair share of the money he’s earned.

Ownership has given management a strong directive to get the deal done, and certainly Ray Shero will be happy to sign the star Russian center no matter the cost.

With Sidney Crosby’s deal in mind, as well as now seeing the temperature of the room from the Getzlaf/Perry contracts, we might be starting to see that cost come into focus.