Simon Despres and Robert Bortuzzo should play over Deryk Engelland

Last night's game painfully proved that despite having more experience and being more "physical", Deryk Engelland should not be in the lineup over rookies Simon Despres and Robert Bortuzzo, both of whom have more to offer in the present and future.

Share All sharing options for: Simon Despres and Robert Bortuzzo should play over Deryk Engelland

A balanced lineup is good and well, but it’s about time that Dan Bylsma and the Pittsburgh Penguins realize that Deryk Engelland is not one of their top six defenseman anymore.

The often cited reason for Engelland getting a jersey every night is his “toughness”. And that is an important quality. Engelland is a tough customer, willing to fight, able to deliver thundering bodychecks, that’s true. But is that even a good thing for a defenseman to sit in the box for five minutes, leaving the rest of the team to pick up the slack while he serves his PIMs?

Deryk Engelland may be a physical player, but with the addition of veteran Mark Eaton, it’s time to realize that Engelland shouldn’t be playing when all the defensemen are healthy.

Last night’s game showed the perfect example- Engelland, for his physicality, sure does end up standing right in front of the goal while the other team scores. Like when he couldn’t tie up Zac Rinaldo’s stick, giving him an easy rebound goal. This wasn’t Scott Hartnell or Wayne Simmonds, where you could excuse it as “oh, Engo was in over his head against a skilled player, and things happen”. This was Zac Rinaldo. That’s inexcusable.

Another perfect example is the Flyers next goal, when Engelland’s mobility and lack of instincts and mobility stationed him right in front of the net when Rinaldo dumped a puck around the net from the right side of the zone, all the way through to Kimmo Timonen along the left wall. Engelland was in no man’s land as Timonen took a pretty innocent looking shot. Engelland looked to block it, didn’t and though the puck did hit Marc-Andre Fleury in the arm/chest, it didn’t look like he got a good read on it and somehow fell into the net.

Is it any coincidence that after these two goals against in the first period, the Pens only gave Engelland 4 shifts (for 2:59 total played) during the second period when the team made their massive comeback?

This isn’t just to pile on a guy for a bad game, but it’s to be realistic about the roster situation. Paul Martin has returned to health, and with Eaton in the mix the Penguins now have the luxury of having eight healthy NHL defensemen. Which meant last night Simon Despres and Robert Bortuzzo sat in the press box in suits while their teammates played.

It's easy to see the rationale for the coaching decision to dress Engelland over the younger guys. Despres has played 35 career NHL games, Bortuzzo only has 17. In an intense rivalry game in Philadelphia, it’s not smart to trust rookies most of the time. Engelland, who’s been a regular member of the team for the past three seasons, is the devil you know.

The problem is, he’s just not very good and isn’t likely to suddenly become a lot better. Despres is 21 years old and seems to improve with each passing week in terms of learning how the NHL game is played and what he can get away with out there. Same, to an extent, with the 23 year old Bortuzzo, who doesn’t have the first-round pick pedigree of Despres, but is a very capable young player who’s getting a taste of NHL action. 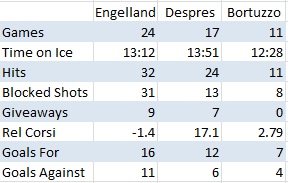 As you can see, none of these players are playing very much. The Pens aren’t asking a lot of their third pair, instead choosing to use the top four defensemen heavily. A lot of these stats (hits, giveaways) are very subjective and at the mercy of the scorekeeper in whatever town the team is in, but it does go to show that for being a “physical” defensemen, Engelland isn’t really throwing more hits than Despres. But, undeniably he is out for more shots and goals against in similar minutes, zone starts and opportunities.

Dan Bylsma and the Pens like Engelland’s experience, they like his grit, they like that he is willing and able to block shots, hit opponents and fight. This is all well and good. But the fact is that the Pens roster now has better options than Engo to get a sweater. At this point, and as games like Philly showed- Pittsburgh is a better team when Deryk Engelland isn’t on the ice. Next time, it ought to be reflected in the lineup decisions.