Playoffs are clinched but the games are just beginning

The Pittsburgh Penguins have officially clinched a playoff berth, but the setup for the playoffs is just beginning.

Share All sharing options for: Playoffs are clinched but the games are just beginning

Take a look at the standings this morning, and even after being off of practice for the past two days, there is more good news for the Pittsburgh Penguins 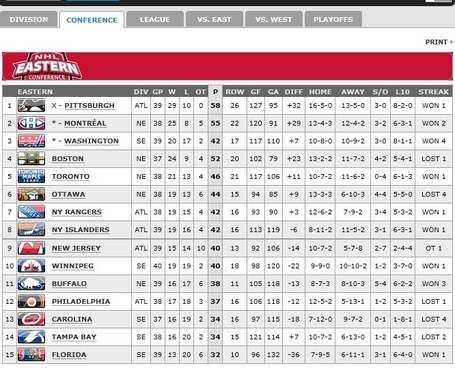 That little “X-” is the prettiest thing you might see all day, because it means the Pens have clinched a playoff berth. Given they just won 15 games in a row, we all knew it was inevitable, but it’s just a good feeling to know that it’s locked up.

Given that the Devils have fallen apart and lesser than expected seasons so far from Philly and NYR, it’s only a matter of time before the “X-“ turns into a “Y-“ to indicate the Penguins have clinched the division. Without getting too tricky into tie-breakers the “magic number” is 5- any combination of Pittsburgh gaining 5 points or NJD/NYR losing 5 points and the division will officially, without a doubt, be clinched.

So with a top three seed all but assured, how are the Penguins building forward to the playoffs on May 1st? Given that Consol Energy Center has a concert on the first night of the playoffs (April 30th) it seems like a really good bet that May 1st is the Pens playoff opener.

Dan Bylsma gave the team two full days off on Saturday and Sunday, a rare treat for a professional hockey player to get a full weekend off. This should do a world of good up and down the roster, which to a man can always use two days away from the rink to rest, heal the normal bumps-and-bruises that come from the extremely taxing job of being a professional hockey player 39 games into a lockout-shortened year.

And especially for the new guys in Brenden Morrow, Douglas Murray, Jarome Iginla and Jussi Jokinen, who haven’t been around very long. The break not only helps physically, but mentally it’s been a whirlwind, especially for the first three players who were all staples of a single franchise for a very long time and recently that got flipped upside down with a trade to Pittsburgh. A two-day breather has to help them get a little more adjusted and take a deep breath to get ready for the weeks ahead.

In the wake of the Sidney Crosby broken jaw, Bylsma has left Iginla and James Neal with Evgeni Malkin, and he’s kept Morrow and Matt Cooke with Brandon Sutter. These are two lines the Pens want to see together in the post-season, and with new faces and players playing on new wings, it’s important to give them game-time to forge the lines together.

A lot has been made of the state of the team chemistry with all the additions being made, given the character and caliber of players, we’re not too worried about how it fits together, these are all focused players going in the same direction- to try and win the Cup. The more important thing is getting the lines all the time possible together, so the players can grow their games together.

When Crosby comes back, he can easily be plugged in with Pascal Dupuis and Chris Kunitz, two veterans that know how to play with Crosby and have both had career years to this point with him. That’s of little concern. But sorting out who plays left wing between Neal and Iginla, and getting Cooke adept to playing right wing, all the while integrating Morrow and Iginla into the Penguins system is going to take time.

Everyone wants to see Crosby back ASAP, but with a healthy cushion and the fact the Pens won’t play a meaningful game in the month of April, there is no rush. The same can be said for defenseman Kris Letang, who has missed time with a broken toe and was still believed to be nursing a sore groin. Getting those guys ready is of paramount importance, and they can have all the time in the month to heal, rest, rehab and return when as close to 100% as possible. Paul Martin (surgery for broken bone in hand) may be on skates again soon and could be back in time for the playoffs as well.

I would look for the Pens to maybe give some rest up and down the lineup soon too- of the eight players to have played in all 39 games so far this season, five are 30+ (Dupuis, Kunitz, Cooke, Craig Adams and Brooks Orpik). All are proud players and useful players but getting the odd night off to re-charge for when it counts could be crucial. Given that Cooke played recently on a bum foot after blocking a shot which affected him to the point of not taking morning skates, it remains to be seen if these guys will rest. They all play physical games and hopefully for the good of the team can be rested here and there, given the Pens immense roster.

It may not mean much to me or you as fans, especially if you buy into a curse (which I do not) but even though the Penguins fell short of setting the all-time winning streak, they can still look to push themselves for another award. The Chicago Blackhawks are 4 points ahead (with a game in hand too) but trying to keep up with them win-for-win could be a good motivator for the coaches to push the players for. Give them something to shoot for, compete for, in largely irrelevant games here down the line. Tuning up for the post-season is infinitely more important and obviously what needs to be stressed, but completing a Presidents Trophy season for having the best record in the NHL is something special and something to be proud of, and Pittsburgh will have a chance to come close for it.