How did the Pittsburgh Penguins blow a lead in the last minute of a game where they had a power play? Let's take a look. It's painful, but necessary.

It's a team game and one little slip can cost you the game. The Pittsburgh Penguins learned that the hard way. The below isn't really meant to dish out blame (everyone could have done something better) but just to illustrate how the breakdown happened.

0:08- Unreal play by Matt Cooke to bat the puck ahead and blow by Erik Karlsson, forcing Karlsson to slash at him, which breaks Karlsson’s stick.

0:20- Whistle blows, Karlsson is yelling at the referee for some reason, not understanding how HE gets the penalty when his stick broke..Maybe cuz he slashed another player and that’s why it broke? 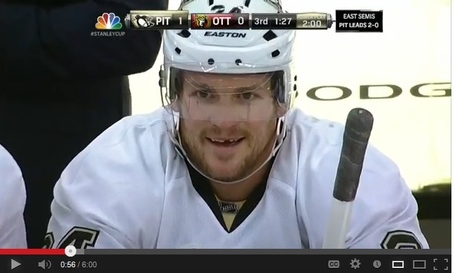 0:55- What a face on Matt Cooke seeing his old buddy throw a fit and go into the penalty box.

1:12- Ok, power play is about to start. 1:27 left in the game and a two minute minor means Ottawa is short-handed for the duration of regulation. Faceoff in Ottawa end, Sidney Crosby to take it. Evgeni Malkin and Chris Kunitz are the forwards, Kris Letang and Paul Martin are the defensemen. Not the true #1 PP unit (since there’s 2 natural defensemen instead of one), but given the situation that’s a good call.

1:20- Right off the bat, this is showing trouble. Crosby loses the draw cleanly to Kyle Turris, Sergei Gonchar controls the puck, makes a pass and another stretch pass is made to Turris who’s inside the Pens zone.

1:31- Malkin muscles the puck away from Turris, swings around the net and skates back to the Ottawa blue-line, where he dumps it in. Ottawa has three players on the blueline and Craig Anderson steadies the puck behind the net.

1:41- Turris skates the puck all the way into the Pens zone, but is stood up at the blueline and Malkin again comes away with it. 1:00 left to go in the game.

1:51- Senators are changing and so does Crosby. Malkin has left the puck behind the Pens net for Letang, who looks out, waiting, 50 seconds left in the game. 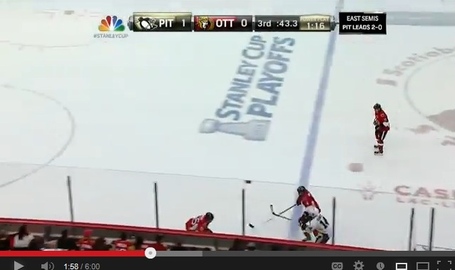 1:58- Kunitz gets a pass from Letang, skates up to the Ottawa blueline and somewhat gently chips it in. Somewhat troubling, he’s the only Penguin you see, Malkin is about 5 feet to the right, standing on the wall stationary. 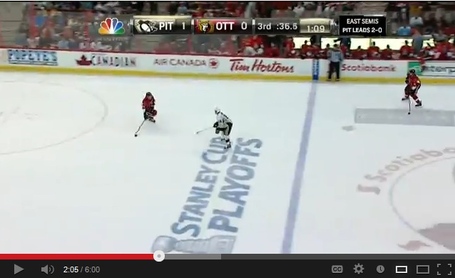 2:05-Chris Phillips won the puck and passed it to Daniel Alfredsson who has wheeled up the zone. Again, you see no other Penguins in the shot other than Kunitz, which is troubling. 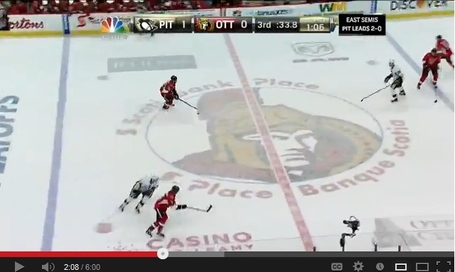 2:08- Alfredsson drops the puck for Gonchar and Kunitz stays with Alfie, which is great on his part. So long as the Pens can keep marking all the Sens, they should be just fine.. 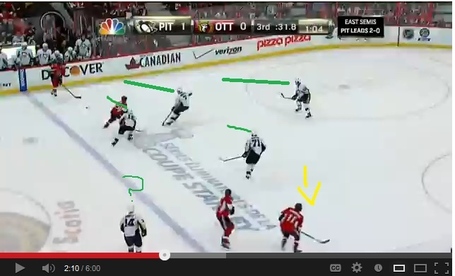 2:10- Gonchar has entered the zone and at least 4 Penguins are looking at him and closing in on him as he chips it over for Milan Michalek. Kunitz has lost Alfredsson. In fact, no one has even noticed that the guy who just had the puck now has a clear path to the net. Big huge, red lights flashing danger. Even if you didn’t know what happens next, you probably know what is going to happen just based off this picture. 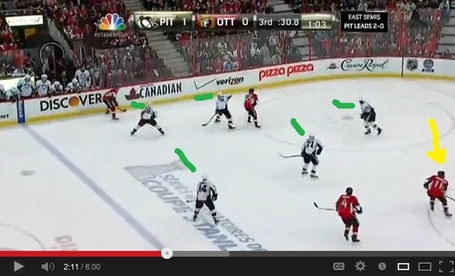 2:11- Paul Martin stays with Gonchar, who’s cleared out room for Michalek to operate. Malkin and Letang are playing in space. Kunitz is coasting. Sutter is ready to challenge Michalek but isn’t going to make it in time. No Penguin on the ice is 100% aware of Alfredsson. 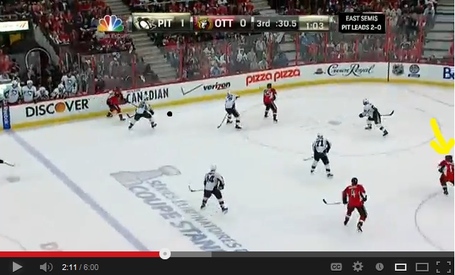 2:11 (part 2)- Moment of the pass from Michalek. Letang and Malkin haven’t done anything and aren’t in a position to stop the puck from going by them, they’re in space. Kunitz hasn’t been a factor in the play since he let Alfie go right by him. Martin’s covering a guy that’s not going in a position to score and Sutter wasn’t able to get to Michalek in time to deflect or break up the pass. And Alfreddson is all alone.

And that's how you blow a 1-0 lead with the power play in the last minute of the game. Definite culpability to all five skaters out there, but in order I think you have the best case to lay blame with: