Why Fleury should not have played Game 4

...or Game 1, for that matter, but Game 2 would probably have been fine.

Share All sharing options for: Why Fleury should not have played Game 4

What follows is rife with small sample sizes. That doesn't mean that the data are useless, but it does mean that this post contains even more guesswork than usual. Take it with a grain of salt.

In the 2013 season, Marc-Andre Fleury played in 33 games while Tomas Vokoun played in 20. This is a much narrower spread between the starter and the backup than we've seen in Pittsburgh since 2007-2008 when Fleury played 35 games to Ty Conklin's 33 and Dany Sabourin's 24. The difference there, of course, was that Fleury was injured, leading to Fleury's strongest playoff ever, well above his career postseason marks:

Much ado was made about the offseason trade for and signing of Vokoun. The assumption was twofold: first, Vokoun, having been one of the best post-lockout netminders, would push Fleury to become a better goaltender; second, that Vokoun was reliable enough to keep Fleury rested for the postseason. This appeared to be the intention of the coaching staff, as well, liberally peppering Vokoun starts into the schedule. Fleury, statistically, had a very similar season to his last two:

Other than the win-loss record, which had just as much to do with the incredible forward play this season as it did with the play in net, the 2013 season is a virtual clone of the prior two years--years that led to early playoff exits.

The point of playing Vokoun more is either to increase the number of days' rest between Fleury's games, or to limit the number of consecutive games Fleury played. So, let's take a look to see whether that was a sound strategy, and if it was, what possible effects that had on Vokoun's play. 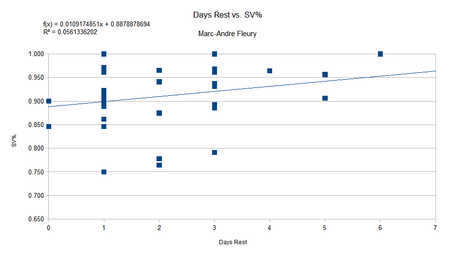 What we see here is that Fleury's play, in general, improved with more days between games. (Zero here means he played on consecutive nights. One day of rest means that there was a game, one day off, and then another game...and so on.) Naturally, this chart omits the first game of the season, because Fleury had all the rest anyone would ever need before it. According to the data, though, about 5.6% of the variance in Fleury's save percentage came because of the number of days' rest he got between games, and the trend points to better play with more rest, with three games looking like the sweet spot that gives good performance and still gets him into enough games to make him worth keeping around. 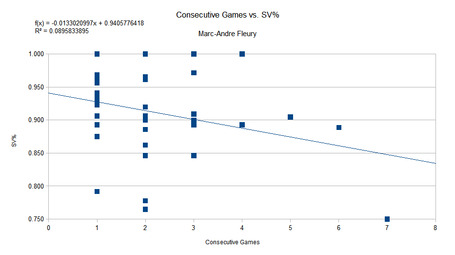 You can embiggen this, too.

And here we see that about 9% of the variation in Fleury's save percentage is due to the change in number of consecutive games played, and the trend points downhill the more games in a row he plays. So, it would seem that the supposition that Fleury needed more regular breaks was indeed the case this year. Fleury likes his rest, and that probably shouldn't be surprising given the athletic style he plays.

So what about Mr. Vokoun? Did days off benefit him the same way? 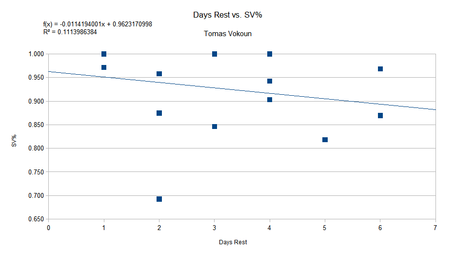 Well...it would appear not. Vokoun didn't play in any back-to-back situations this year, but in general, his play was better on short rest than it was after a layoff, even when you count the putrid effort against Buffalo on April 2. It's easy to see why: Vokoun played 4 games after 1 day off, and he had 117 saves on 118 shots for a save percentage of .992 in those games. Obviously, that can't carry over a full season, but it's still ridiculous.

A full 11.1% of the variation in Vokoun's save percentage can be accounted for by looking at days of rest. Okay, then, what about the consecutive games issue? 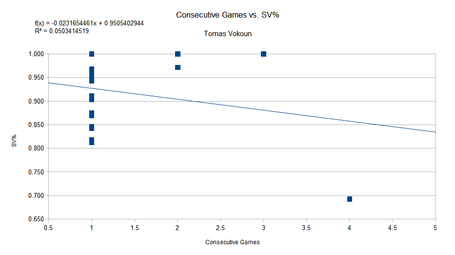 Well, this looks like it might just be a goalie thing. Play a bunch of games in a row, and you get tired. About 5% of the variation in Vokoun's save percentage stems from the number of games he played in a row.

It appears, based on this small amount of data, that a near one-to-one split in games played might have been best for both of the goalies, even perhaps favoring Vokoun a bit unless the games were already spread apart on the schedule. The coaching staff didn't exactly hew to this plan, but it was a lot closer to this than in years past. So why did they deviate from the plan for the playoffs? Your guess is as good as mine, but this alone may have cost the Penguins Game 2 of the series given that it was a one-goal loss. It almost certainly contributed to making Game 3 more difficult than it needed to be, and, well, Fleury's sloppy play in Game 4 was quite evident. Sure, it might just be a coincidence, but after Fleury played the last three games of the regular season, presumably to tune him up for the playoffs, it appears that playing him in the next four consecutive games as well might have been far too much to ask of the flagging netminder. It's not that Fleury isn't a capable goalie, it's just that the typical starter workhorse role might not be his strongest suit.