A look at the season that Tyler Kennedy had and whether or not he has a future as a Pittsburgh Penguin. 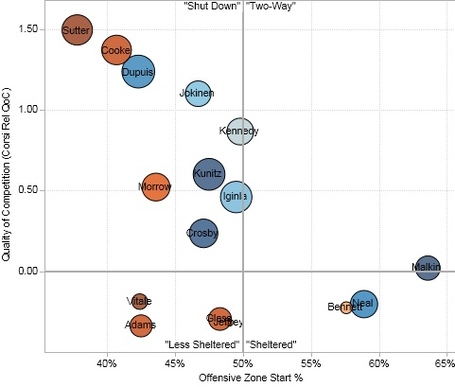 Kennedy’s shot based advanced stats are pretty good, which you’d expect considering he’s a player that’s going to attempt a ton of shots from anywhere and everywhere. His quality of competition and zone-starts were pretty challenging, being as he was usually a 3rd liner with Brandon Sutter and Matt Cooke for most of the regular season before the acquisitions of Brenden Morrow and Jarome Iginla pushed him down the depth chart.

Goals wise, it wasn’t such a pretty picture. Tyler Kennedy was on the ice for 14 Penguin goals and 21 goals against in 2013, third worst among forwards beating out only Joe Vitale and Tanner Glass. For a guy who outshot the opposition, he sure saw more rubber go in his own net which could be a product of his limited playmaking ability, poor shot selection and decision making.

Kennedy scored five of his six goals (and 8 of 11 points) this season against Atlantic Division opponents. Largely because of this production, his plus/minus was +6 against division opponents but a putrid -12 against Southeast/Northeast teams.

Tyler Kennedy is at another career cross-roads. He’s a restricted free agent, so the Penguins have to make the first decision if they want to qualify him or let him walk to become unrestricted. They took the latter course of action two summers ago during the Jaromir Jagr flirtation, but then quickly moved back to TK when it became obvious that Jagr was going a different direction. This time, that situation won’t happen again, but it’s difficult to see how Kennedy still fits in the Penguins. If the team can re-sign Matt Cooke, they can keep Cooke-Sutter as the start of a 3rd line an add Jussi Jokinen or perhaps a free agent option. Kennedy probably doesn’t want to be a 4th liner at this point in his career, but it’s pretty obvious that he doesn’t have a bright future contributing too much with Pittsburgh.

Vote in the poll below on the simple question of should the Pens bring back Tyler Kennedy or should they let him go and add your comments below.