Our friends at Japers Rink had a sweet look at the Caps skaters Corsi for percentages in the 2013 season, which got us to wondering how the Penguins faired in that regard. We also drew the data from HockeyAnalysis.com and looked at the 5v5 Corsi For percentages for all pairings that played at least 50 minutes together. 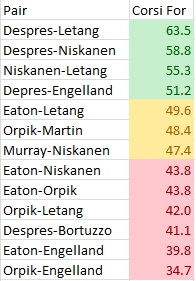 A major takeaway of this chart is the flattering light it puts on Paul Martin (who missed 14 games of the season with a broken hand). Brooks Orpik played about even with Martin and much worse with everyone else. Martin and Kris Letang only played 40 minutes together, so they didn’t qualify, but they had a 62.2 stat together. Martin seems to have driven Corsi for many of the Pens defensemen, almost everyone (in small sample sizes) played better with Martin than without him.

Letang and Simon Despres with a glowing, team-high 63.5 marking, albeit with the caveat that they a fairly small sample size of 93 minutes played together. With the addition of Rob Scuderi, it’s unknown if the pair of French Canadians will play together, but this is pretty strong evidence to show that a Despres-Letang pair should be used again.

Speaking of Letang, if there was any doubt why he got a big contract for the future, the reasoning can be seen here. He played big minutes with almost everyone, and aside from Orpik all other players (Despres, Eaton, Martin and Matt Niskanen) all had much higher than season average Corsi while they played with Letang. Kris Letang absolutely tilts the ice in his team’s advantage at 5 on 5.

Mark Eaton got a lot of credit during the regular season for coming in off the street and helping to stablize the team, but for pure on-the-ice play, he didn’t fair too well. Usage factors into this (thus why more protected and sheltered players like Despres look better), but this chart doesn’t paint Eaton in a nice light.

Put Deryk Engelland with a defensive defenseman like Eaton or Orpik and they’re going to get roasted. Not news, but that’s very clear. Interestingly Engo with Despres (each player’s most common partner) was surprisingly strong. Dan Bylsma protects them in terms of zone start and quality of competition and they didn’t disappoint in this metric.

Anything else jump out at you or otherwise surprise? Tell us in the comments.