Money talks: What the 2008-09 Penguins team is making now

We take a look at the salaries then and now of the Stanley Cup winning 2008-09 Pittsburgh Penguins team to show who's making more money and how the team has done keeping together their core of that championship team.

Share All sharing options for: Money talks: What the 2008-09 Penguins team is making now 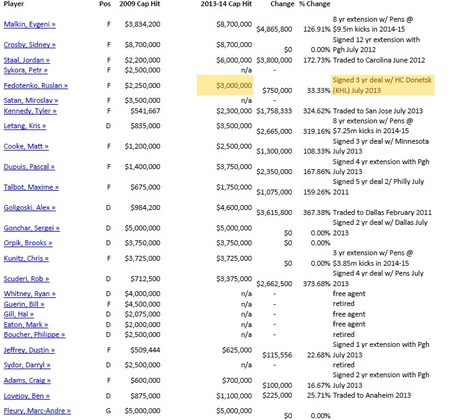 With Rob Scuderi coming back to Pittsburgh, and other key pieces from the 2009 team like Tyler Kennedy and Matt Cooke finding new homes for 2013-14, we got to wondering what the Cup winning 2009 squad looks like now five (!!) years later.

Interesting chart and an interesting summer time debate and look back